The Whoopee! Years - Cheeky as Quizmaster, in E.T. Challenge and TV Quiz Kids

During Cheeky's final Whoopee! run in his eponymous strip, he also made some extra-stripular appearances.

The first of these occurred in the 19 March 1983 edition when our toothy pal was co-opted to introduce that week's Quizmaster feature. This puzzle series was hosted by a different luminary from among Whoopee!'s roster of funny folk each issue. In fact the first Quizmaster half-page of teasers, in Whoopee! dated  04 December 1982, was introduced by the jerseyed japester's erstwhile Cheeky Weekly colleague Calculator Kid who, accompanied by his extravagantly-moustachioed dad, would feature as subjects in a Quizmaster puzzle in the 14 May 1983 edition (hosted that week by Little Ed). Some of the Stage School kids would set the questions in the 29 January 1983 comic, Mustapha Million would host 12 March 1983's Quizmaster, while Robot Granny (previously known as 6 Million Dollar/$6,000,000 Gran) would pose the puzzles in Whoopee! dated 30 April 1983.


Returning to our toothy chum, his next appearance in a vehicle other than his own strip resulted from a reader participation feature which was launched within his own page in the 26 February 1983 issue...


By the time the results were published in the 27 August 1983 edition, the comic had undergone another merge to become Whoopee and Wow!


Cheeky's final Whoopee foray into a feature other than his own regular strip occurred on the TV Quiz Kids page in the 21 January 1984 comic, which I examined back in 2013. 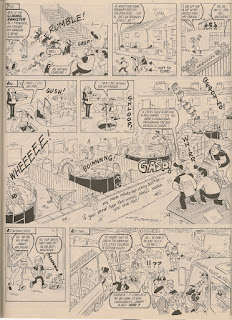 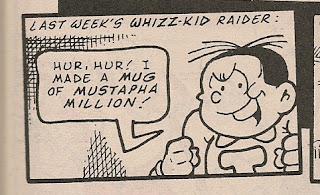 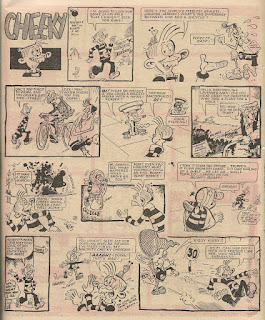 Many thanks to Peter Gray for letting me know about the current issue of Infinity magazine, which carries an article in which Mark Campbell enthuses about Krazy, the comic which of course spawned the Cheeky phenomenon. Mark does justice to the groundbreaking title, and also gives us a nice potted biography of our toothy pal. Infinity is a magazine I've never read before, but there certainly seems to be a varied selection of interesting pieces in the current edition.

I got my copy today in WH Smith for a very reasonable £3.99, and it's available online in print or digital versions.
Posted by Niblet at 15:32 No comments: