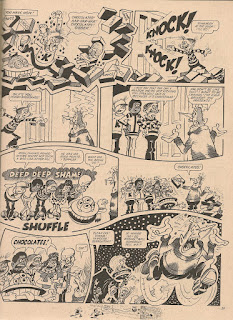 Don't eat too many chocolates, and have a merry Christmas, Pals!
Posted by Niblet at 10:24 No comments:

Our toothy pal is certainly enjoying a high profile at the moment as, following cover appearances on recent issues of Comic Scene and Fanscene, next year he'll be gracing the cover of (and presumably be included among the reprints inside) a special Free Comic Book Day publication titled Funny Pages which you can read about on Lew Stringer's blog.
Posted by Niblet at 17:26 No comments:


Not long after appearing on the cover of Comic Scene issue 2, our toothy pal can be seen on the front page of another publication. This time Cheeky is gracing FANSCENE’s '50th anniversary of UK Comic Cons' issue (free to download - although a donation to the charity of your choice is encouraged - here). As is explained inside the ‘zine, the collection of characters depicted above have all performed the role of ‘editor’ of either a comic or letters page. Cheeky was of course the editor of the Chit-Chat letters page.

Unfortunately, other than a mention on the page that identifies all the comic greats gathered on the cover, Cheeky is not featured inside this issue – not really surprising as the focus is on recollections of various Comic Cons through the years. Sadly, CheekyCon has yet to be organised (although it can only be a matter of time - just think of the cosplay possibilities).
Posted by Niblet at 17:04 6 comments:

In the second part of this short series examining Cheeky's contributions to the Christmas 1976 edition of Krazy, we skip ahead to page 19, the site of 2 reader participation features. Our grinning pal joins his Krazy Gang chums to deliver a selection of readers' gags in the Krazy News-Pound.


Over the page Cheeky is in the spotlight as his own 4-page  'Ello, It's Cheeky strip commences. We know from Cheeky Weekly dated 19 January 1980 that Frank McDiarmid enjoys drawing snow, and the toothy funster's festive stroll around Krazy Town allows Frank to indulge himself in plenty of wintry scenes. 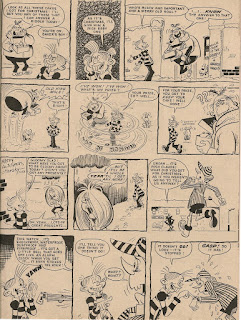 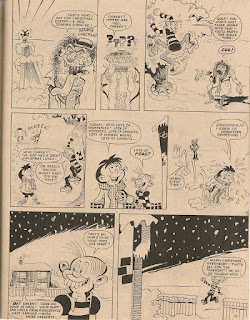 We'll leave Cheeky heading home to enjoy some more Christmas pressies, but join me again in a few days as I examine more Cheekiness from Christmas '76.
Posted by Niblet at 14:49 No comments:

I was so sorry to read on Lew Stringer's blog of the sad passing of the mighty Terry Bave. Terry of course drew Calculator Kid for Cheeky Weekly and the successful character continued in Whoopee! after Cheeky's comic came to an end. There was a time when it seemed Terry had artwork appearing in just about every comic in publication, with a never-ending roster of hugely popular characters created in collaboration with his wife Shiela. I always found Terry's artwork to be very appealing, and he depicted a world that was, despite the regular appearance of bullies who were a staple of comic scripts of the period, very cosy and reassuring as justice was always served by the end of the story. This time of year I particularly remember Terry's Christmas strips into which he put extra effort, enhancing the festive fun by drawing a border around them featuring clever seasonal designs. It's impossible to imagine the heyday of British comics without Terry's vibrant and always amusing strips. What a great legacy he leaves behind.

My thoughts are with his family, friends and countless fans.


Cheeky made his debut in the first edition of Krazy dated 16 October 1976, and just a few weeks later the Christmas issue of that title saw our toothy pal participate in festive fun for the first time. I've always assumed that Cheeky was supposed to be about 9 or 10 years old (and like most comic characters he remained the same age for the entirety of his nine and a half year comic career), so it wasn't strictly speaking our grinning pal's first Christmas, rather the first time that readers were able to observe his seasonal escapades.

Cheeky appeared on the cover of Krazy's Christmas '76 edition, in his role as a member of the Krazy Gang, all of whom were depicted cowering behind the snow-bedecked comic title and narrowly avoiding being hit by a ginormous snowball. Cover artist Mike Lacey would later draw the toothy funster in Cheeky Weekly. On page 2 the Gang were involved in a story featuring their niffy nemesis Pongo Snodgrass (who I suspect launched the icy projectile at them on the front cover), drawn by Ian Knox who would go on to depict the adventures of Cheeky Weekly's second-longest surviving character, 6 Million Dollar Gran, who, in her post-Cheeky Weekly career, evolved into $6,000,000 Gran then later Robot Granny and finally Gran (leader of Gran's Gang). As of Krazy's Christmas 1976 issue, Cheeky's jumper still showed his Gang (and therefore comic) affiliation - his more familar 'C'-bearing top would appear in August of the following year in preparation for the October launch of his own title.


Join me again in a few days for the second part of this examination of Cheeky's 1976 Christmas capers. 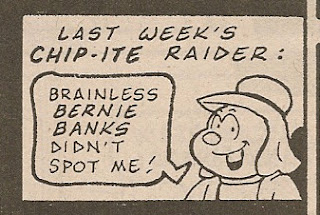