5 weeks after perpetrating a raid on Odd-Ball, Mustapha was once again subject to the unwanted intrusion of a sneaky Whizz-kid. Can you spot the interloper? Scroll down to see the culprit revealed... 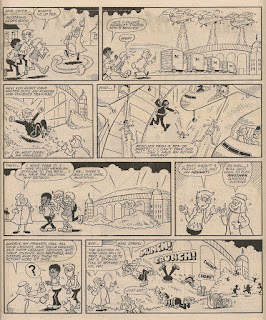 Yes, it's the Whizz-kid head honcho himself, Sid, on a solo raid without his serpentine sidekick, Slippy. Sid's smug 'I made a mug of Mustapha Million' is becoming somewhat hackneyed now, having been used by various raiders on three previous occasions that our moneyed mate has suffered raids, namely 06 December 1986, 18 October 1986 and 28 June 1986.