Nosy Nora made her debut on the Friday page of Cheeky Weekly's first issue, in pursuit of the toothy funster as he himself tracked down The Mystery Comic. In her first outing it's not clear whether Nora was previously aware of The Mystery Comic's existence, but in the majority of her subsequent appearances she dogged Cheeky as he sought out that perplexing publication, in order that she could read it herself. Unlike most of the Cheeky's Week supporting cast, whose appearances would usually be limited to a maximum of three consecutive panels as they participated in a gag with Cheeky, Nora's pursuit of the elusive comic would regularly span a whole page (although she didn't necessarily appear in all the panels). Nora lacked perseverance and would often depart in despair of ever seeing The Mystery Comic just before Cheeky acquired his copy.


In the 25 February 1978 issue Nora was unwittingly the source of The Mystery Comic, but in the following issue (04 March) she obtained a copy of the coveted publication before Cheeky was able to track it down, thanks to Baby Burpo who was exacting revenge on the toothy funster for forgetting the terrible toddler's birthday.

Cheeky got his own back the next week when sneaky snooper Nora was unable to leave home while suffering from a cold. Our grinning pal stood outside her house reading the comic just beyond range of Nora's glasses as she peered forlornly out of the window.

In the 25 March 1978 comic Nora was frightened by Yikky-Boo in the second Friday panel and failed to pursue Cheeky as a result. It seems the event proved traumatic, as this strip brought to an end a 23-week run in which Nora attempted to pursue Cheeky in search of The Mystery Comic every Friday (Mustapha Million's strip followed the Friday page every week in this 23 issue sequence - his was the only Mystery Comic story to appear in Cheeky Weekly until the end of September 1978). In the following issue, Nora migrated to the Wednesday page, where she was seen among a bunch of Cheeky's pals in just a single panel. Nora was then absent from the comic for 11 issues (despite Cheeky continuing his weekly search for The Mystery Comic), returning on Friday in the 12 August 1978 comic, where she introduced the Calculator Kid story on the following page (Mustapha had relocated to the page after Thursday as of 01 July 1978). This was the final time that Nora was named in the pages of Cheeky Weekly, although she did appear in a further 4 issues. The first of these final outings came after a 4 week gap, when she delivered a couple of lines during the Interval. A further 29 weeks passed without an appearance by Nora, until she was seen sporting a facsimile of the toothy funster's trademark jumper in 31 March 1979's special issue. Mike Lacey drew Nora in 2 Cheeky's Week elements in the comic dated 16 June 1979, neither of which were speaking roles. Nora's final nose around the pages of Cheeky Weekly came in the 14 July 1979 comic, when Mike Lacey depicted her (silently) among Cheeky's classmates at school.


In her first Cheeky Weekly appearance, Krazy Town's schoolgirl snooper was named Nosy Norah (although in the same panel the word was also spelled 'nosey'). She was also referred to as Nosey Nora on 2 occasions, but the usual spelling was Nosy Nora.

Nora appeared, partially obscured by Auntie Daisy, as Cheeky and his pals invited readers to join them in  Cheeky Weekly, in the 'Ello, It's Cheeky strip in Krazy's final issue. 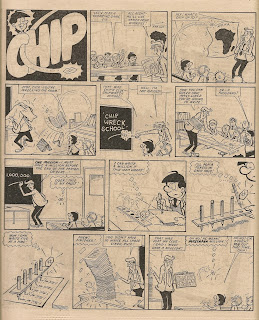 A further rant of mine on the subject of Chip can be enjoyed/endured here.
Posted by Niblet at 15:13 No comments: 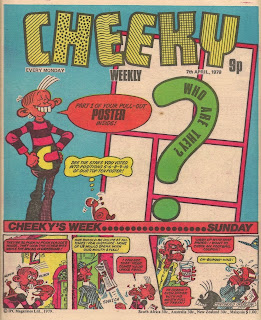 There's further evidence of adjusted artwork at the foot of the Monday page, where a hand other than Frank McDiarmid's appears to be the source of the illustration in the final panel and again the style of lettering appears to differ from that on the rest of the page. I'd guess that this week's Skateboard Squad story, in which the intrepid trio are victims of a rather odd April Fool cake-snatch prank, had originally been slated to appear immediately after 6 Million Dollar Gran in order to keep it within April Fool's Day. However, since that's something which never happened in Cheeky Weekly's run, maybe it was later felt that moving the Squad to follow the Monday page would improve the flow of the comic. 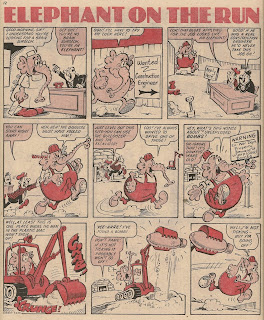 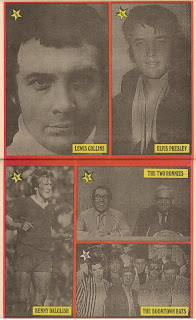 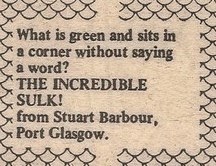 As we have seen, a number of the cast of the Cheeky's Week strips in Cheeky Weekly originated in the 'Ello, it's Cheeky/'Ello, I'm Cheeky pages in Krazy. However, some characters who appeared quite regularly in those same Krazy pages failed to make the transition to Cheeky's own comic. This new series will focus on the toothy funster's Krazy pals who didn't make it to Cheeky Weekly. 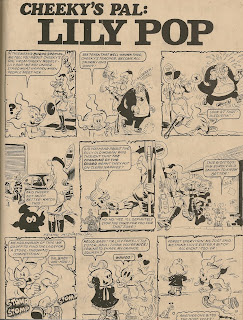 Burpo introduced Lily again in the first episode of Cheeky Weekly's run of Burpo Specials almost 10 months after the above strip was published.
Posted by Niblet at 15:09 1 comment: