We need to talk about Chip

As mentioned in my earlier post, Cheeky Weekly's merge into Whoopee! was an unusual one, as the toothy funster and his pals were allocated a whole 16-page dedicated section in the centre of the host comic. Yes, half of the combined comic was given over to Cheeky and his pals! Now, I'm not enough of an expert on comics to say whether or not this was an exceptional amount of space to be allocated to a 'mergee', but I suspect it was.

Of course not all of the Cheeky section in the first combined issue contained strips - one page carried the Friscodisco competition, and a further two pages were devoted to the Fib card game. But comparing the number of surviving Whoopee! strips with the total Cheeky Weekly newcomers in that first edition of Whoopee! and Cheeky gives a surprising (to me, anyway) result...


That's right, the Whoopee! characters occupied just a half-page more than their new Cheeky Weekly chums (and I'm being generous in classifying joke page Smiler's Smile-In as a Whoopee! strip).

This was not so much a merge, more an attempted coup by the toothy funster and his fellow refugees.

Since the Friscodisco competition was a one-off feature celebrating the inaugural amalgamated issue, a page was to become free within the Cheeky section in subsequent issues of Whoopee! and Cheeky. So which of the Cheeky Weekly alumni not already ensconced within its pages would be chosen to occupy the prized location? There were a number of quality contenders - Elephant on the Run? Disaster Des? Speed Squad?

Sadly, none of those was to secure the vacant spot. Political manoeuvring by IPC management, clearly intended to prevent the Cheeky camp outnumbering their hosts, saw the installation of an inferior interloper with no connection to the toothy funster's iconic title.

Chip, which made its debut on page 2 of the Cheeky section in Whoopee! and Cheeky dated 16 February 1980, was a new strip and therefore had no allegiances to either Whoopee! or the Cheeky crew.


The rather ill-tempered and violent dad is distinctly unappealing but the main problem with the 'kid with gadget' set-up of this strip is its similarity to that of Calculator Kid, residing just 14 pages away on the back cover of Cheeky's comic-within-comic. I'm obviously biased here, but while I can accept the idea of a talking calculator, a giant, flying microchip with the power of speech (although in later episodes the titular microprocessor 'thinks' his dialogue) and which can control any machine stretches credulity too far. Mike's dad isn't just irascible in the first episode for the purposes of the set-up, he's unpleasant in subsequent instalments as well, and in early stories a feud develops between Chip and the peevish parent. 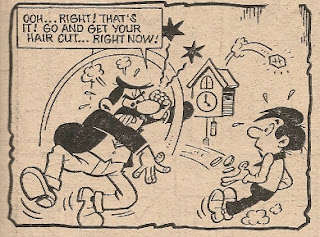 Whereas Calc is almost infallible, Chip's interventions usually go awry. Mike/Michael is clearly too scared of his dad to ask him to take the irresponsible processor back to the laboratory where he works to get the thing reprogrammed. 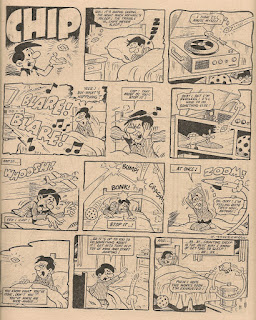 The Cheeky section within Whoopee! and Cheeky lasted until the issue dated 04 October 1980, and thereafter the strips that had hitherto been confined to the 16 innermost pages were freed to wander the comic. Since Chip's tenuous link to the Cheeky oeuvre ceased at this point, his activities from that date onward need not concern us. My intention for this post is little more than to acknowledge the strip's existence due to its (unwelcome) presence in the toothy funster's section. However, in fairness I have to report that the majority of Whoopee! readers clearly didn't share my opinion of the feature as Chip continued until Whoopee! merged into Whizzer and Chips in 1985.

The final issue of Cheeky Weekly included two Disaster Des stories. Possibly it was originally intended that Des would transfer into the merged title, and one of those Des pages in that ultimate edition was originally prepared for use in Whoopee! and Cheeky. However, neither of the adventures in question have an explanation of the premise of the strip, which one might expect to see in the first episode of a post-merge feature.

*Merry-go-Round was a concept which I'm assuming was introduced at the point when Cheeky Weekly merged into Whoopee! Each week a strip selected from a number features that had appeared in Whoopee! prior to the merge, yet had not secured a permanent slot in the combined title (such as Blabbermouth, Ivor Swap and Dads as Lads), would appear on the M-g-R page. This device allowed long-time Whoopee! readers to continue to enjoy some of their fun pals who would otherwise have been dropped to make space for the incomers, and this arrangement could be seen as an acknowledgement by the editor of the large number of pages devoted to Cheeky and his chums.
Posted by Niblet at 16:28