Not Looking a Day Older after 33 Years!

17th April 2019 was a momentous day for all friends of Cheeky as our toothy pal appeared in a new comic strip for the first time since the Krazy Gang feature came to an end in February 1986. I rushed to my nearest WH Smith on the long-awaited day and skidded to a halt by the comic shelves but was disappointed to find no copies of The Cor!! Buster Humour Special in evidence. Had they sold out? Possibly, but I doubt it - I have read reports that in some branches of Smith's the special was located on the top shelf and I must admit I didn't think to look there for it.

Anyway, I ordered a physical copy online later the same day and it arrived in the next post, so well done to Rebellion and their fulfillment partners Intermedia Solutions.

I was pleasantly surprised to see that Cheeky gets to appear several times in the special. Prior to reading the special I wondered if he would play much of a part in Lew Stringer's Who's In Charge? strip (script by John Freeman) as in Lew's preview of the strip our toothy pal is silent. However I'm pleased to report that Cheeky is involved in the plot and gets a few lines of dialogue, including the strip's closing comment.

Lew has also provided an introduction to characters from classic Fleetway/IPC titles, among them the mighty-molared mirthster, who is seen in a panel drawn by Frank McDiarmid and lifted from the 1982 Cheeky Annual. Great to see Frank represented.

Cheeky also gets some dialogue on an advert for the forthcoming Free Comic Book Day Funny Pages comic - the custard pie image being Robert Nixon's rendition of our toothy pal from the cover of his 1981 annual. The pic of Cheeky at the bottom right of the Funny Pages cover is Frank's work sourced from the 1982 annual. 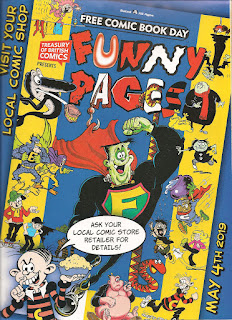