Next up in my examination of the 1981 festive escapades of those characters from Cheeky Weekly who continued to appear in Whoopee! is Paddywack.


I like Jack Clayton's depiction of the laughing party guests in the final panel.

The remaining survivors from Cheeky Weekly at this point were Charlie Counter and his battery-powered buddy, Calc. UK television viewers in 1981 had a choice of three channels (Channel 4 would launch in November 1982), most homes had only one TV and less than one in ten households had a video recorder. Thus the Christmas day televisual dilemma looming chez Counter was a familiar one to comic readers of the time.


I found this to be a rather sad ending as the Counter family withdrew to separate rooms on Christmas evening, but no doubt they all gathered again once their respective programmes had finished. Terry Bave furnishes his customary Christmas embellishments. Always good to see Charlie's dad's extraordinary moustache.

If I may, I'll close this look back at the Christmas 1981 edition of Whoopee! with a couple of non-Cheeky related strips. Actually, the first does in fact have a link to the toothy funster, since it's drawn by the mighty Frank McDiarmid. The Spectacular Adventures of Willie Bunk first appeared (as far as I know but see my observation later) in the debut issue of Whizzer and Chips in 1969, drawn by Frank. You can see that strip on Peter Gray's blog. To me, it seems that there's evidence of re-sizing of artwork on those Whizzer and Chips pages, so I'm wondering if that strip was in fact a reprint. Anyway, Wikipedia tells us that Willie's Whizzer and Chips adventures ended in that comic's 26 December 1970 issue. However, Frank brought Willie out of retirement to begin a new run of adventures in Whoopee! dated 12 September 1981, and Peter posted the first of that new series here.

Here's the lad with the magic glasses as he appeared in Whoopee! dated 26 December 1981... 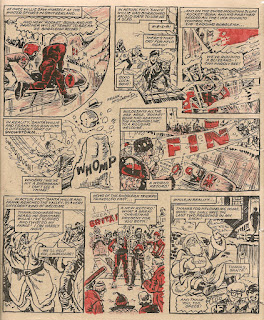 Frank's less cartoony style in evidence here works very well with this kind of story. As Peter mentions on his blog, the Bunk strips made use of spot colour to denote the fantasy sequences where readers shared the world that young Willie was experiencing through his glasses.

Coincidentally, Lew Stringer recently posted a similar 'owner of enchanted eyewear' character's Christmas episode, namely Billy Binns and his Wonderful Specs, from Boys World in 1963. 'Bins' is of course slang for spectacles; I've seen speculation that it's short for binoculars, or that it's Cockney rhyming slang based on the phrase 'bins and receptacles' which I can only imagine was a term used in relation to refuse collections in days gone by.

My final selection from this festive Whoopee! is the back cover's Smiler story. If you remember from the first part of my look at the issue in question, Shiner featured on the cover, so this page nicely rounds off the issue. I always enjoy Nick Baker's artwork, and on his strips featuring the ever-smiling little lad there's the bonus of the descriptions of the various 'beams' issuing from the hero's gob as the story progresses. We join the family just as they've polished off their festive slap-up feed...

I hope your Christmas and New Year are suffused with 'beams'.
Posted by Niblet at 11:32 2 comments:

Over at the nothingbutafan blog, Col is looking at the dummy version of Cheeky Weekly that was produced prior to the comic going on general sale. As I understand it, IPC would often produce early versions of their new comics as publicity material to be distributed to newsagents. It would seem that the publishers felt that a tangible copy of the proposed comic would be more likely to convince shop owners that the new publication was going to appeal to kids, thereby encouraging healthy orders, than some sort of flyer. I think the dummy issues were included in a pack containing information about the comic, and examples of the free gifts if I'm not mistaken. In later years, of course, preview copies were given directly to the readers of existing comics - I'm thinking of Oink! and others that I can't quite remember (Nipper, I think).

Col's posted an interesting examination of the differences between the dummy version of Cheeky Weekly number 1 and the issue that actually hit the newsagents shelves.
Posted by Niblet at 18:01 No comments:

My trawl through the pages of Whoopee!'s 1981 Christmas issue in search of the Cheeky Weekly survivors now arrives at pages 18 and 19, occupied by a character called Robot Granny. This is of course the aged automaton who Friends of Cheeky first knew as 6 Million Dollar Gran. On her transfer to Whoopee!, Gran's strips were for some reason given a numerically-focused change of title and she appeared as $6000,000 Gran, occasionally reverting to her former title, as was the case in her final outing before being given a more radical re-titling as of Whoopee! dated 09 May 1981, in which the synthetic senior citizen's strips were re-branded Robot Granny (not the last time her strip would undergo a title change). This new stage in Gran's career saw her become a nanny employed by Lord and Lady Swankly to look after their kids at Rottenrich Hall, which is where we find her on Christmas Eve, 1981... 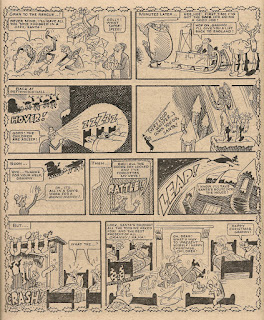 As it's Christmas I'm not going to complain at the two references to Gran being bionic. Her debut in Cheeky Weekly made it clear that she was a robot but despite this she was often described as bionic during her run in the toothy funster's comic. It's surprising that the mistake was still being made when such descriptions of her attributes contradicted the strip's new title

Gran's abilities suit her to the oft-used 'Helping Santa out of Trouble' plot.

This third installment of my look through the Christmas 1981 issue of Whoopee! in order to observe the seasonal adventures of our Cheeky Weekly pals who had survived the cancellation of their comic brings us to page 13's Christmas Quiz Time, a workout for Xmas-pud-addled brains that featured the toothy funster and his chums (including Paddywack who was for some reason absent from the cover of that festive edition). I have already posted about this page, so I'll direct you here for the full info.

Next up is Cheeky himself, now in somewhat reduced circumstances. Once he was the star of his own comic, and had begun his Whoopee! run with 5 pages a week, but Christmas '81 finds our grinning pal confined to a 2-page centre spread, and even then he has to share it with strips featuring his slimy sidekick and a bearded, jolly fellow who gets very busy at the end of December. Nevertheless Frank McDiarmid packs the space with a welter of Yuletide gags, as Cheeky meets a good number of his Krazy Town pals. Sadly there's no slap-up feed but the feature concludes with a nice sentiment courtesy of the man with the sleigh and reindeer.


More from Whoopee! at Christmas '81 soon,

In the second part of this look back at the festive frolics of the survivors from Cheeky Weekly who continued to appear in Whoopee! at the end of 1981, our attention turns to Stage School, where the eternal battle between the juvenile showbiz wannabes and their resolutely anti-theatrical tutor shows no sign of letting up as the season of goodwill approaches... 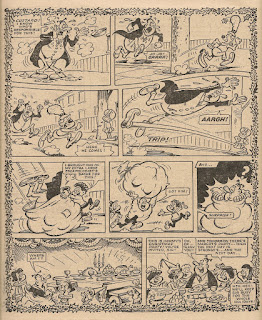 I always feel a bit cheated if a Christmas story doesn't end with a slap-up feed, and Robert Nixon (who does some great seasonal border work) furnishes a sizeable festive nosh-up, complete with steaming turkey. The Christmas truce ending is suitably heartwarming.

Another look back to Christmas '81 coming soon.
Posted by Niblet at 17:34 No comments:


This issue of Whoopee!, the Christmas 1981 edition despite its Boxing Day cover date, features a Yuletastic cover by the great Nick Baker. Nick, who's probably most well known for drawing the ever-grinning little lad Smiler, endows the entire Whoopee! line-up of fun pals with Smiler-like 'beams' (well, apart from Frankie Stein). Mercifully, we are spared the full horror of Cheeky, whose gob could hardly accommodate a more fearsome set of gnashers than his own, with a mouthful of Smiler-alike dinner manglers, since the toothy funster is only seen in profile. However, Calculator Kid, Mustapha Million, Teacher and kids from Stage School and 6 Million Dollar Gran (survivors all from Cheeky Weekly which merged into Whoopee! when the toothy funster's comic ceased publication in February 1980) all get a dental upgrade.

Not seen on this cover is Paddywack, the other Cheeky Weekly survivor who continued to appear in Whoopee! at this stage.

Let's see what our mate Mustapha was up to as Christmas 1981 approached... 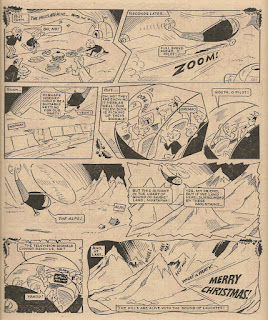 Pity we don't get to see a slap-up feed at the end.

I'll be examining the 1981 festive doings of our other Cheeky Weekly pals soon.

Before the rise in television ownership began to dent cinema attendances, it was common to see street performers attempting to entertain queues of eager film fans as they waited for the picturehouse to open. These musicians/dancers/escapologists etc would of course be hoping to raise cash from their captive audience. Krazy Town’s busker, Buster, was often seen performing to the queue of kids waiting to stampede over the Commissionaire and into the Saturday morning picture show, but his less-than-harmonious one-man-band stylings were never seen to result in donations.


The 03 December 1977 issue was the only edition in which Buster had two separate encounters with Cheeky – the first being in the usual pre-film show sequence, but the second occurring as Cheeky left the cinema after watching the programme. This 3-panel strip was constructed from images originally seen when Buster made his debut in issue 1 (above).


In Cheeky Weekly dated 19 August 1978 the toothy funster got a glimpse of his life in the year 2038, where his bewhiskered future self met up with Buster…

The final Saturday picture show sequence appeared in Cheeky Weekly dated 02 December 1978. A week later Buster was seen on Friday (the first time he had appeared on any day other than Saturday) departing for a new location…

Buster was then absent from the comic until the 05 January 1980 edition where he was seen (or WAS he?) on Monday at Cheeky’s new year party. My original thought regarding the long gap between Buster's 09 December 1978 and 05 January 1980 appearances was that the January 1980 artwork was drawn a year earlier when Buster would still have been fresh in readers’ memories, but was not used at that time due to the industrial dispute which caused the comic to suspend publication for 3 weeks in December 1978. However, this is clearly not the case as Cheeky's new year 1979 party was depicted in the 13 January 1979 comic. This makes me wonder whether the one-man-band shown at Cheeky's 1980 Hogmanay bash was indeed Buster with his bass drum moved to his back to accommodate the accordion, or in fact a musician hired by Cheeky's parents. The fact that the partygoers seem to be enjoying the music (the way that Disco Kid is seriously getting down indicates some damn funky accordion) suggests that it isn't Buster.

Discounting the above as being a performance by Buster means that the incompetent instrumentalist appeared in a total of 32 editions of Cheeky Weekly.


The terrible tunesmith was featured on the Pin-Up Pal poster in Cheeky Weekly dated 25 March 1978.

Since the Saturday morning picture show sequence was never depicted in Cheeky’s strips in Krazy, it’s no surprise that Buster never appeared in that comic.

Buster the Busker - Number of appearances by Element