So when exactly was the 'Whoopee! and Cheeky' Era?

When a comic was deemed by the publishers to be no longer viable, instead of passing directly into comics history it would be 'merged' into a more successful title. A number of the more popular strips from the failed comic would be amalgamated into the stronger, longer-running companion, the intention being that a significant number of the readers of the defunct comic would be persuaded to follow their fun-pals into the combined publication, delivering a boost to the main title's readership numbers.

For a while after the merge, the title of the failed comic would appear beneath the main title on the cover of the fused funny paper, until quietly being dropped some time later.

So how long did the merge between Whoopee! and Cheeky last? The answer is... it depends where you look.

IPC had long exhibited concerns over newsagents selling their titles at more than the cover price. I'm not sure how prevalent this comic-price-inflating activity was (I can't really imagine many kids would stump up more than the cover price for their favourite title), but the publisher included some small print in each of their comics, usually at the foot of the back page, advising retailers that price-hiking was not allowed. They were also keen to make it clear that subscription facilities (inland and overseas) were not now available, probably an attempt to stop kids sending in postal orders and asking for their favourite comic to be posted to them from King's Reach Tower each week. The text of the small print always included the comic's name, and if we judge the Whoopee! and Cheeky era based on the content of these warnings to unscrupulous comic vendors and would-be subscribers, then there never was such a period, as Cheeky was never referred to alongside Whoopee! in the legal jargon.

The most obvious place to examine in order to establish the length of the Whoopee! and Cheeky merge is of course the front cover, but even in that location things aren't entirely straightforward.

The first combined issue, cover-dated 09 February 1980 did announce itself as Whoopee! and Cheeky (the incoming comic's full title of Cheeky Weekly was never acknowledged post-merge), as did the subsequent 13 editions. However, for the following 4 weeks, no issues were published due to an industrial dispute. When the comic returned with an edition cover-dated 14 June 1980 it was titled Whoopee!, although a banner at the top of the comic showed Cheeky announcing 'See my Cheeky comic inside'. 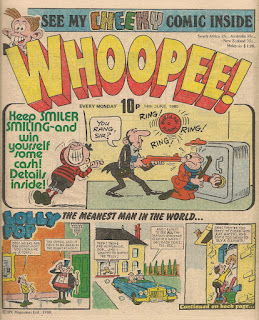 The next issue to be published was a 2-week edition dated 21 to 28 June 1980 (although the usual 32 pages). This issue was also just titled Whoopee! but with the same Cheeky announcement as the previous edition.

Weekly publication then resumed with the issue dated 05 July 1980, and for that and the subsequent 5 weeks the title was again just Whoopee! but with Cheeky's banner announcement.

The issue dated 16 August 1980 was just titled Whoopee!, with no announcement by our toothy pal - there was no room for it due to the competition promo. 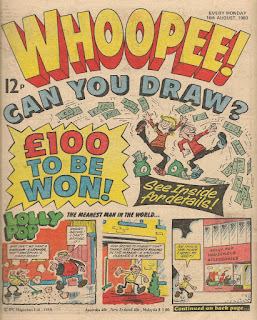 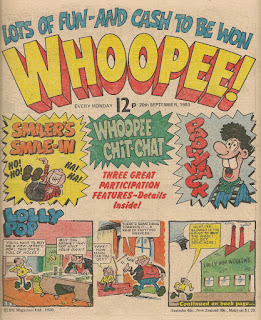 The 27 September 1980 issue featured Cheeky's banner again, but for the final time - the following week's edition was the last issue to include a Cheeky section in the centre of the comic, but it was just titled Whoopee! - a 'Great news for readers' banner bumped Cheeky's from the cover. Another merge wasn't in the offing - the great news was of the How To Draw Comic Strips booklet, the first part of which would appear a week later and its presence in the centre pages was what displaced Cheeky and pals from their erstwhile location. 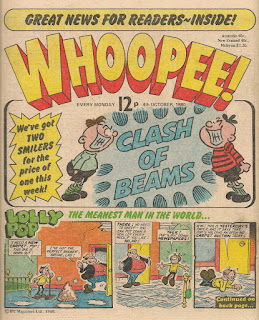 For the next 4 weeks the comic's title was Whoopee!, but the comic dated 08 November 1980 saw Paddywack, having been freed to roam the comic since the demise of the Cheeky section, move onto the front cover and bring with him the 'and Cheeky' to add to the comic's main title. This arrangement persisted for the following 6 issues. 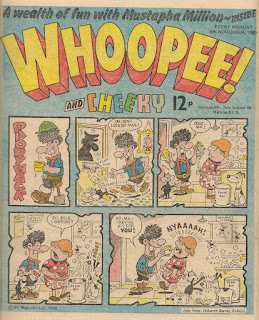 Robert Nixon's festive cover of the 1980 Christmas edition, which prominently featured Mustapha Million, showed the comic to be titled Whoopee! with Cheeky, the only time that particular conjunction was used to describe the relationship between the two titles. 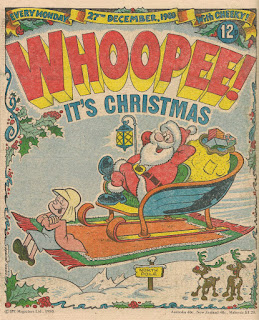 There was no mention of Cheeky on the cover of the 03 January 1981 edition as most of the front page was was given over to the announcement of the 1981 calendar inside. The 12-month planner, drawn by Robert Nixon, styled itself the Whoopee! Calendar since by the end of the year Cheeky would no longer be mentioned on the cover.


The ensuing 25 issues were titled Whoopee! and Cheeky, and then the 04 July 1981 comic's front page heralded a Four Papers competition and the commencement of the cut-out Young Road Traveller's Handbook, leaving no room for a mention of the toothy funster's comic. A week later the title was back to Whoopee! and Cheeky  even though the ever-grinning Smiler had usurped Paddywack's prized location. 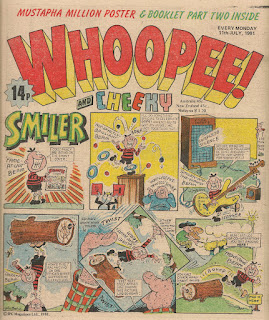 Reference to Cheeky was not included on the front of the comic dated 18 July 1981 due to the announcement of a promotion relating to Wall's ice cream.

The 25 July 1981 issue was the final one to make reference to Cheeky as its absorbee. 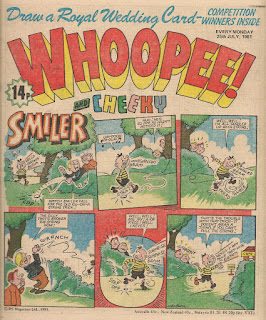 Based on the covers, the Whoopee! and Cheeky era therefore can be seen to span the issues dated 09 February 1980 to 25 July 1981. However, there are two further locations we can examine, each of which which give a slightly different view of the situation.

As of 09 February 1980 the letters page was titled Whoopee Chit-Chat, in a nod to Cheeky Weekly's Friends of Cheeky Chit-Chat page. From that date, readers of the combined comic were invited to post their amusing missives to Whoopee! and Cheeky at King's Reach Tower. 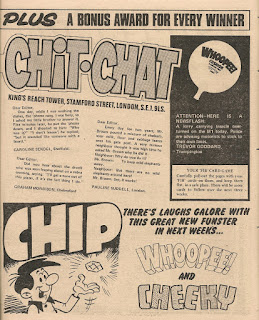 The address for reader submissions remained Whoopee and Cheeky until the issue dated 11 July 1981, after which the address appeared as Whoopee. Thus Cheeky ceased to be referred to in the Whoopee Chit-Chat address 2 weeks before the final 'and Cheeky' reference on the cover (although the Chit-Chat name for the letters page was retained until the 24 April 1982 edition, after which the letters page was re-titled Whoopee! Winners).

So although reference to the letters page would suggest a slightly shorter or longer existence, the covers incontrovertibly declare the Whoopee! and Cheeky era to last from the 09 February 1980 to 25 July 1981 issues.

The other source of information as to the status of the Cheeky merge is the 'place a regular order' ads which were a recurring feature in comics of the time;

The first such ad to appear following the Cheeky merge was printed a week after the toothy funster and his pals moved into the host comic. The comic title is clearly Whoopee! and Cheeky, in both the image and on the coupon, although the happy readers are depicted enjoying comics titled Whoopee. Maybe this ad had appeared before the merge and the 'and Cheeky' is a later addition.