The features - Friends of Cheeky Chit-Chat

Most comics of the late 1970s included a readers' letters page. Replies printed on these pages were often composed by a staff member writing in the guise of one of the characters appearing in the comic. Cheeky Weekly's letters page, Friends of Cheeky Chit-Chat, was one such, as the letters were answered as if by the toothy funster himself. Letters pages had two main functions; to give readers a feeling of rapport with the producers of the comic, and to cheaply fill some space that, had a strip appeared instead, would incur script and artwork costs.

As British ComicsMeister Dez Skinn recounts, the letters printed in the first issue of a comic were somewhat fraudulent, of necessity being written by staffers since a new comic can have no readers before its debut. However, Cheeky Weekly was rather tardy in adopting the customary letters page - the first Chit-Chat didn't appear until issue 60, dated 09 December 1978 (the final issue before publication was halted for 3 weeks due to a strike). It's therefore possible that the letters printed on that first Chit-Chat page were genuine, unsolicited contributions from readers, received since the comic began publication. However, I suspect that the first letter isn't legit, as it's a blatant plug for companion title Whizzer and Chips, nor is the letter addressed to Auntie Daisy, as it's a very obvious feed line to a joke.

The first Chit-Chat was a somewhat truncated affair, sharing a page with a list of the lucky winners of the Smurf competition. Space was at a premium in this shortened issue of Cheeky Weekly. 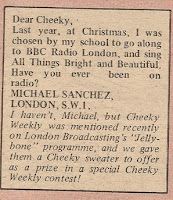 Despite being a late addition to the comic, after its debut Chit-Chat became a permanent feature in all the subsequent issues of Cheeky Weekly, clocking up 58 appearances.

As of the 24 February 1979 Chit-Chat, Cheeky would introduce the page with news of what had occurred in the Cheeky Weekly office that week. From these columns we learned that Mick was Departmental Art Editor, Paul and Tony were the art staff, David and Colin were the 'editorial lads' and Uncle Bob (presumably Bob Paynter, IPC's Group Editor) was 'the guv'nor' (although he was only mentioned twice, the final time being in the concluding issue's Chit Chat, in which Cheeky thanked the staff, and the readers for their support). The secretary was Pauline.

From issues dated 20 October 1979 to 15 December 1979, Cheeky's introductory column on the Chit Chat pages gave brief details of the staff and artists who worked on the Cheeky Weekly strips. Due to a mix-up, Cheeky's column from the 20 October 1979 comic was repeated (minus the closing sentence) in the following week's Chit Chat. 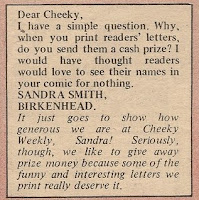 Readers whose letters were printed on the Chit-Chat pages won a £2 prize, plus a Friend of Cheeky badge, as given away with issue 3 of Cheeky Weekly. Despite the highly inflationary nature of the economy at this time, the cash prize remained unchanged throughout the comic's run. 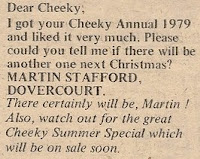 Surprisingly few of the letters printed commented on the quality of Cheeky Weekly. The majority of the letters chosen for publication concerned the activities of readers' pets.

From the first Chit-Chat to that dated 30 June 1979, the page would feature the toothy funster's face (the 'standard Cheeky face' as featured at the top of this blog), with a speech balloon reading 'Let's hear from you!'. As of the 07 July 1979 revamp issue, the Chit-Chat page was renamed Cheeky's Chit-Chat and this and all subsequent Chit-Chats (with the exception of the 27 October 1979 issue), were printed with a red title and spot colour. From this point on, the toothy funster's grinning fizzog appeared only on the picture of the badge. 37 Chit-Chats were single-pagers or less, and 21 covered a second page, or part thereof. Tub's brand of heavyweight hilarity occupied the lower half of the second Chit-Chat page on 11 occasions. 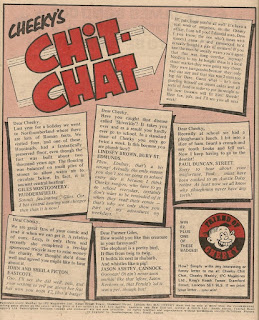 The Chit-Chat page was often the site of the small stamp collecting ads which appear to have had a symbiotic relationship with comics for many years. I'm not sure what it was that attracted comic readers to philately, but the stamp companies soliciting comic enthusiasts to send off for their products 'on approval' must have found the funny papers a good source of business. 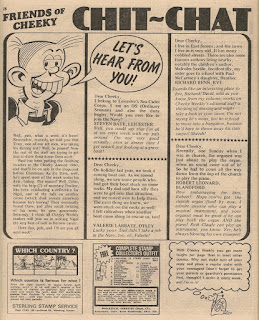 From the 05 January 1980 edition, as the comic wound down in preparation for the final issue, readers were no longer told on the Chit-Chat page they could win £2 and a badge by writing to Cheeky. Instead the panel which had previously solicited readers' contributions stated that the letters printed had won the cash and badge. 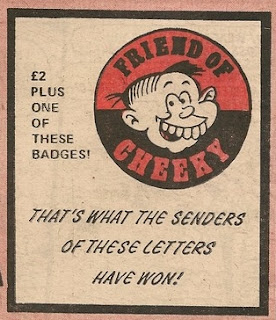 When Cheeky Weekly merged with Whoopee! as of 09 February 1980, Whoopee!'s letters page was retitled Whoopee Chit-Chat, but the letters were addressed to the editor rather than the toothy funster.

Chit-Chat in the Cheeky Weekly Index