Having examined the careers of Cheeky and his ex-Cheeky Weekly colleagues in the pages of the weekly Whoopee! (and Whoopee), there remains the question of which (if any) of the Whoopee Annuals and Specials boasted appearances by our former Cheeky chums. I am now embarking on this task, an undertaking somewhat hampered by my failure to locate all the publications concerned.

Despite this hindrance, let's press on with an inspection of the contents of the Whoopee! Special and Annual published in 1980. That of course was the year in which Cheeky Weekly came to an end, and survivors of the toothy funster's comic were assimilated into the weekly Whoopee! as of its 09 February 1980 issue (the comic's cover at this point was still resplendent with exclamation mark). Thus the Whoopee! Annual and Special appearing on newsagents' shelves in the year in question would be the first in which it is not unreasonable to assume that Cheeky-related material may have appeared. However, a Cheeky Annual and Special were also vying for attention on those very same 1980 shelf spaces, hence our gathering here today to establish whether the contents of the Whoopee! equivalents include any Cheeky elements.

Let's start with a look at all the adverts that appeared for Annuals and Special in the pages of Whoopee! in 1980 (or at least as of the aforementioned merge issue, which is the first I have in my collection).

IPC were clearly trying to maximise sales of the Cheeky Holiday Special in April, but I was a little surprised to see that the Whoopee! Summer Special wasn't advertised in the pages of Whoopee! until August, and I assume it was in fact on sale earlier in the year. In addition to the Whoopee! Summer Special, a Whoopee! Frankie Stein Holiday Special (advertised in May and June) was also available to those seeking reading matter to keep them occupied on the beach, but we can be sure that no Cheeky-related material was included in that title thanks to Irmantas' customarily assiduous account of its contents.

The British Society of Opticians, when reviewing the business done during 1980, may have been puzzled by the spike in the number of consultations conducted in the latter half of the year.  The bemused oculists were probably unaware that a significant number of those seeking help with their eyesight resulted from the distressing off-register printing on the cover of this publication. However, the only Cheeky-related item inside would not have unduly taxed any optic nerves, printed as it was in monochrome on page 63. This was an ad promoting four of IPC's finest funnies, including the cover of the 23 February 1980 issue of Whoopee! and Cheeky, featuring our grinning chum's tooth-packed fizzog and the showbiz-obsessed youngsters of Stage School, one of the features that had made the transition from Cheeky Weekly into the weekly Whoopee!. 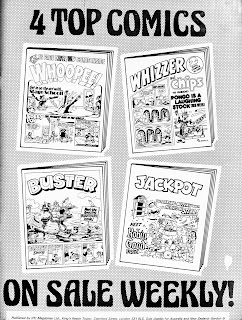 Just in case I'm accused of defaming printers Development Workshop Ltd, I must admit that not all copies of the 1980 Whoopee! Special were afflicted with printing problems. The image of the cover above is one I found on the internet, but my own copy sports a more crisply-rendered image on the front... 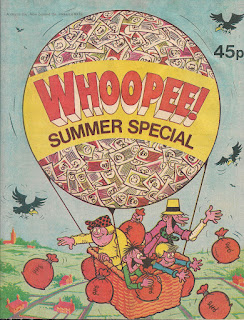 The Whoopee! Annual published in the autumn of 1980, dated a year in advance as was the custom, boasted an immaculately-printed cover (well done to the inky-fingered folks operating the presses at Vlasveld & Co., Rotterdam), on which the Bumpkins continued their aerial cash-distributing campaign. However, unlike their summer operation, where the risk of injury to the unsuspecting citizens of Whoopeeville as a result of randomly-plummeting moolah was extremely high, their festive cash drops were at least targeted at chimneys, although the number of ensuing Christmas conflagrations can only be guessed at. This Annual contained no Cheeky-related content, but it did include 8 pages drawn by the Cheekmeister General himself, Frank McDiarmid. These are presumably all reprints.

Frank drew 2 Frankie Stein episodes in the Annual. I'm assuming these are reprints from Shiver and Shake - Irmantas tells us that Frank contributed 4 Frankie stories to that title. Here are Mr M's strips featuring his namesake in the 1981 Whoopee! Annual... 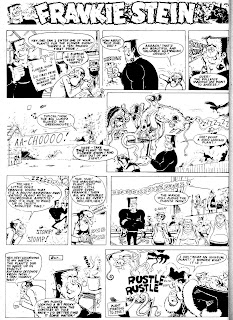 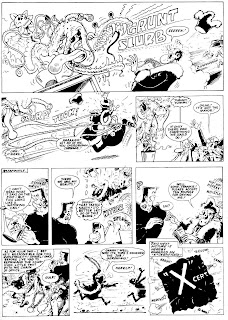 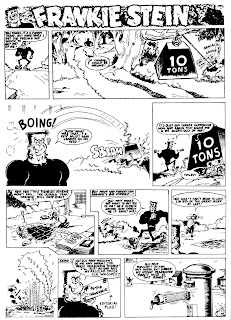 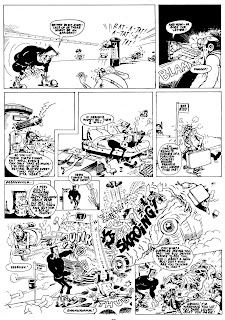 Frank also provided a Spy School page. I didn't know where this feature originated, but the ever-reliable Irmantas furnished the answer. Here is Frank ghosting for Graham Allen, originally from the weekly Whoopee!, and reprinted in the 1981 Annual... 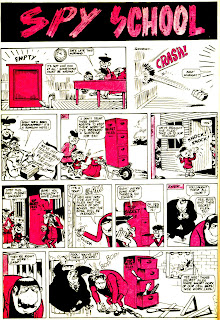 Irmantas is a big Scared-Stiff Sam fan, and I can understand why. Here's Frank's rendition of the muscle-bound milquetoast from Whoopee! Annual 1981 sourced, presumably, from the archives of the weekly Whoopee!... 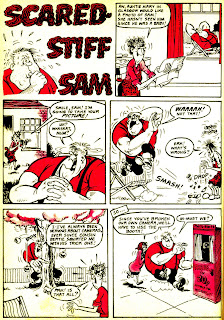 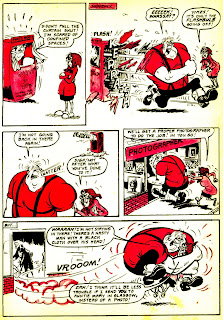 Frank's remaining foray into the Annual was a page possibly of interest to the aforementioned vision-preserving professionals, although the subject orb may have been beyond even their help; Evil Eye was one of the rotating humorous horrors aboard Whoopee!’s Ghostly-Go-Round. 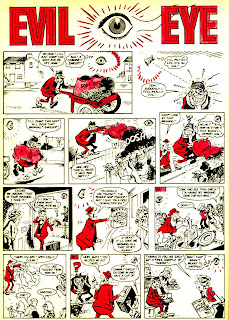 Join me again soon when I examine the Whoopee! Special and Annual published in 1981 for any Cheeky material.