Mini mesmeriser Hypno-Tessa made her debut in Cheeky Weekly dated 14 April 1979. A sceptical toothy funster doubted her hypnotic skills, but was forced to concede when Teacher was observed in romantic pursuit of Ursula (hope his wife didn’t find out).


Most regularly seen in a migraine-inducing, zig-zag patterned dress (always drawn as such by Frank McDiarmid except for the 04 August 1979 comic in which Tessa appeared in singlet and shorts while competing in a cross country race), Tessa’s subjects were initially limited to Cheeky’s pals who, when entranced, exhibited actions contrary to their customary behaviour, but as the weeks progressed she began to direct her 'fluence toward late 70s celebrity (and in one case later notoriety). See table below for a list of all those who fell under Tessa's spell.

The third issue to feature Tessa, dated 05 May 1979, included two appearances by Cheeky’s new chum; one on Wednesday and another on Friday when Teacher was hypnotised into handing over his copy of Teachers’ Weekly to allow our grinning pal to read that week’s instalment of Menace of The Alpha Man.

The 09 June 1979 issue was another highlight for fans of Tessa as she again appeared twice – first on Monday, and then as the subject of a full-colour Burpo Special.


In the comic dated 08 September 1979, Tessa says ‘Just to prove I can hypnotise animals as well as humans, take a look at this’, indicating a confused-looking dog which she had induced into emitting a curious ‘Miaow!, Cheep!, Oink!, Mooooo!, Baaaaah!’. However, Cheeky and his readers had already witnessed a bull coming under Tessa’s spell in the 21 July 1979 edition, and a cat and dog were similarly entranced during the aforementioned Burpo Special in the comic dated 09 June 1979, although our grinning pal was not privy to those proceedings.

The humorous hypnotist's final Cheeky Weekly appearance was a somewhat downbeat one, as she failed to exercise her powers of persuasion.


Tessa never appeared in Cheeky's strips in Krazy, but featured in 28 issues of Cheeky Weekly.

Just a week after suffering a raid by Toy Boy, Mustapha had his revenge. However, rather than a direct retaliation at the toy-loving tyke, our moneyed mate played a more subtle game and picked another strip from the fertile mind of Terry Bave, the stars of which didn’t smell a rat. This raid is not to be sneezed at - can you spot our ex-Cheeky Weekly chum?


This is an unusual raid as Mustapha's probing digit seems to influence development of the plot - normally the interloper is seen but has no effect on the events unfolding in the strip. 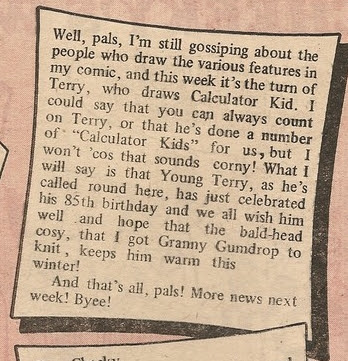