Known by some (apparently) as Oi!, due to his habit of prefixing his riddles with said exclamation, Manhole Man would literally pop up when Cheeky was nearby, deliver his 'What do you get if you cross a X with a Y?' feed line (wearing the manhole cover as a kind of metallic flat cap), and swiftly return to his subterranean lair.

Manhole Man's first appearance in Cheeky Weekly, on the Sunday page in the first issue, was not in fact from a manhole, but through a hole in his front door.  In the 18 February 1978 comic, Manhole Man surfaces in the cinema, and on 29 April 1978 and 08 July 1978 we get a Manhole Man's-eye-view of the world. 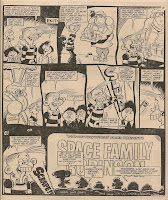 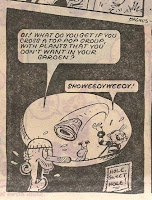 Manhole Man made a number of appearances on Cheeky Weekly's cover - he appeared in 16 Cheeky's Week cover strips, and was the first character to appear on the cover alongside Cheeky when the comic's 'new look' was introduced in the 07 July 1979 issue.  The new look dispensed with cover strips, instead featuring gags which took up the whole of the front page (promotions permitting), and Manhole Man went on to feature on a total of 8 new look covers, plus an appearance on 18 August 1979's cover which dispensed with the joke to feature the first part of the giant Cheeky poster inside. 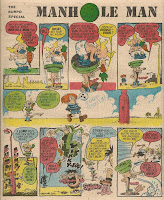 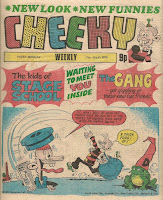