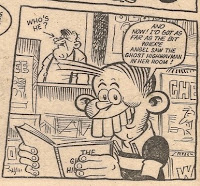 Cheeky started reading the second James Bold adventure, The Ghost Highwayman, in the 07 January 1978 issue of Cheeky Weekly.  The venue for his Bold reading switched from his bed, where he read the previous novel, to the Newsagents, where for the duration of this Bold tale, Cheeky would sneak a free read each week before being ejected from the shop at a point of peak excitement in the narrative.

Although the title of the second Bold tale was given in the final instament of the previous tale, it was not mentioned again until the issue dated 14 January 1978, where Cheeky held the cover of the book towards us, and although the title is partly obscured by his hand, we could make a guess as to what it is.  A more explicit reference to the title of the novel was made on the cover of the issue dated 25 February 1978, which seems rather late to be promoting this particular Bold tale, as it ended the following week. 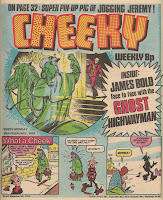 Bold's glamorous 'assistant', Angel O'Mercy is back for this second adventure, which begins one night on Gallows Hill… 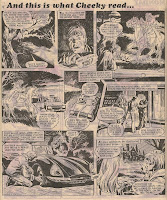 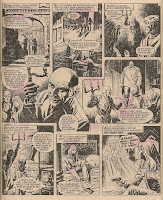 Angel fires at the apparition, and Bold enters to find that the ghostly figure has departed by another door, taking Angel's purse.  As the intrepid duo make to follow the highwayman, they are met by Goole who, Bold observes, is wearing boots similar to those worn by the apparition.

Returning to his room, Bold rests in a chair, a wise move as an hour later his bed tips over which, had he been slumbering therein, would have pitched him into a pit containing sharpened stakes.  Knotting some sheets together, he climbs down into a passage leading off the pit, but is clubbed into unconsciousness.  Meanwhile a secret panel opens in Angel's room and she is abducted.

Bold wakes in a locked room, but finds the bars at the windows are loose and climbs onto a ledge, from which he sees Goole and Igor in another part of the building.  Goole is carrying a gun and planning to check on his captives.  Leaping through the window to surprise the suspicious pair, Bold locks them in the room from which he has just escaped, and frees Angel.  At that moment the highwayman appears, but immediately leaves, locking the door as he goes.  Our heroes then become aware that the ceiling of the room in which they are trapped is descending, threatening to crush them.  Frantically checking the walls, Angel discovers a secret panel through which she and Bold escape.

Emerging into another room, Bold and Angel are surprised to discover Goole and Igor tied to chairs.  Goole explains that he agreed to look after the manor for the ghost, but attempted to rob Bold and Angel himself, disguised as the highwayman.  On discovering this, the ghost had bound Goole and Igor, pending, presumably, some fiendish retribution.  Bold, ever the trusting soul, releases the creepy couple who vow never to return.  Just as Goole leaves, he directs Bold to a particular stone in the fireplace that, when pressed, opens the entrance to a hidden chamber, in the middle of which stands a large pyramid-like structure.  Atop the pyramid is a bed in which lays the ghost!

As they approach the apparition, a trap door opens, hurling Bold and Angel into a pit.  Bold lifts Angel so that she can grab the edge of the pit and pull herself out.  On escaping from the pit, Angel realises the ghost has vacated the bed, and decides to run from the chamber in an attempt to lead the highwayman away from Bold who is still trapped in the pit.

Having locked the ghost in the belfry, Angel returns to help Bold out of the pit.  The pair then hear a voice from within a locked room and on breaking in find an old man in chains.  The man reveals he is Caleb Croke, whose family own Gallows Hill Manor.  The ghost imprisoned him to make him reveal the location of the family treasure.  Croke refused to divulge its whereabouts, but the ghost did find a plan of all the secret passages in the building.

Croke tells our heroes that the treasure is hidden in a maze underneath the house, so the three enter the maze to check if the treasure is safe.  As they approach the hiding-place, the ghost emerges from a secret panel, grabs the old man, and returns from whence he came.

The comic now switches to spelling the old man's surname as Croak, as Bold decides that trying to chase the ghost through the secret passages would result in them getting lost.  He therefore presses on to find the treasure.

Suddenly Bold and Angel are attacked by three panthers.  Bold races up a staircase in order to lure them away.  As the lead panther strikes, a trapdoor opens, hurling Bold and the big cat down another staircase.  Meanwhile, Angel becomes aware that a suit of armour nearby is not empty.  It must be the ghost!  She attempts to run, but stumbles.  However, Bold, who has presumably escaped while the attacking panther was stunned after its fall, appears and the sinister figure escapes.  What became of the other panthers is not clear.

Bold then reveals that the passenger liner 'New York' docked at Southampton this afternoon, and he expects that the ghost will rob passengers travelling to London on the nearby Southampton-London road.  The astute ghost-hunter is entirely correct, as just at that moment the ghost highwayman is waylaying a car and relieving the wealthy American occupants of their cash.

Bold and Angel follow the ghost as it enters a concealed cave, but are distracted by cries for help.  Locating the source of the frantic screams, they discover Caleb Croke (yes, they've now gone back to the original spelling) in a dungeon, up to his neck in water and in danger of drowning as water continues to pour in from a pipe.  Bold releases the old man from his bonds and hauls him to safety.  Croke reveals that the ghost has found the treasure and is preparing to depart.

Bold sees the highwayman escaping on his horse, but mounts another steed from the manor's stables and sets off in pursuit.  As the chase reaches the road, a coach driver is so shocked to see the ghost highwayman that his vehicle veers across the road as the spectre passes by.  Determined that nothing will delay him, Bold, evidently a skilled horseman, urges his mount to jump the coach.  The highwayman turns and fires his pistol. 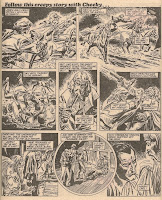 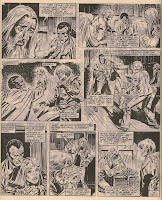 Well, what a turn up.  Did any of you guess that it wasn't actually a ghost before the final page?  I think the fact that our heroes discovered the 'highwayman' in bed, might have given them a clue.  Or maybe they thought it was a very tired ghost.  Bold again displays the trusting side of his nature when he lets Goole and Igor go, minutes after he saw them set off with a gun to search for Angel and himself.  It must be admitted that he is a good judge of character, as after releasing them, the pair troubled Bold no more.

The final episode of The Ghost Highwayman appeared in Cheeky Weekly dated 04 March 1978, the ninth instalment of this tale.

We have seen evidence that the first James Bold story, Fangs of Fear, was based on a script originally written for the Maxwell Hawke feature in Buster.  The Ghost Highwayman was presumably based on Maxwell Hawke and The Ghost of Gallows Hill Manor, (Buster 11th Feb - 29th April 1961).  Assuming the original story had an unbroken run, it spanned 12 comics, while the Bold version concluded in 9 weeks.

I can't identify the artist who drew this Bold story.  If anyone can id the artist, please get in touch. UPDATE 02 November 2010 - My thanks to Shaqui Le Vesconte and Tony Ingram over at the Comics UK Forum for identifying the artist as Mike White.

For a summary of all the James Bold tales, see here.