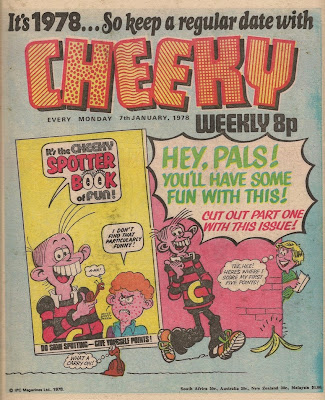 This week's cover foregoes the What A Cheek strip to announce the Cheeky Spotter Book of Fun, starting today.  Readers are invited to cut out the booklet instalments over the next four weeks, and assemble it when they have all the sections.

The cover looks to me as though it's an assembly of cut-and-paste and original artwork by unknown hand. 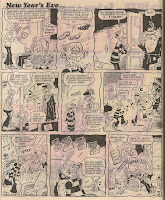 Page 2 is the only occasion where a day is continued from the previous issue, as we are still in the final seconds of New Year's Eve, eagerly awaiting midnight and the first guest of the New Year.  The first-footer turns out to be Uncle Hamish, making his debut.  Cheeky's mum has changed her outfit and hair colour in the few seconds that have elapsed since we saw her in the previous issue.  A group of Cheeky's (adult) pals arrive, including Milkie who has some bottles (of gold top?), and the new year bash commences.


6 Million Dollar Gran is brought forward a day to Sunday in this issue, and stars in a new year-themed episode as she carries the church bell to London for repair and returns it in time for ringing in 1978.

On Monday Cheeky visits the newsagents to collect his paper round money and is unable to resist a free read of the new James Bold novel.  On being discovered and ejected by the newsagent during the 'Suddenly' element of Cheeky's Week which is introduced in this issue, Cheeky walks past a puddle that some Krazy Town graffiti artist (surely not Cheeky?) has attributed to Walter Wurx.


Oscar explains on Thursday that he didn't have time to make a home movie this week, but we all know that the Home Movie page was actually bumped because of the New Year's Eve page, which resulted in extra Cheeky's Week material in this week's issue. 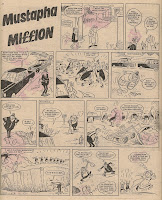 This week's Mustapha Million story is another new year resolution-themed tale, and concludes in a single page instead of the normal 2-pager.  We can't blame this one on New Year's Eve again - Mustapha owes his truncation to the amount of IPC in-house advertising in this week's issue.  Page 18 consists of 2 ads; one for Shoot!, which is featuring the first part of their cut out 1978 calendar, and another promoting the cut out spotter books starting this week in Krazy, Whoopee! and Whizzer and Chips.  On page 30 there's an ad for Roy of the Rovers, (whose readers can cut out the first part of a full-colour FA Cup chart), plus a couple of stamp collecting ads ('please tell your parents'), and the instructions for saving the spotter book instalment in this issue.  IPC management certainly believe reader loyalty can be secured by getting them to hack chunks out of their favourite comics.  Don't they think that if readers are keen on a particular title they will keep the whole comic rather than just bits of it?  I always feel short-changed by any cut-out-and-keep items, I much prefer pages of strips.

All the Cheeky's Week art this week is by Frank McDiarmid pencils.  Jim Petrie does the honours on the spotter book.  Uncle Hamish and Newsagent make their first appearances.  This week we say goodbye (and good riddance as far as I'm concerned) to the Wile E Coyote feature. 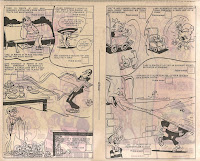