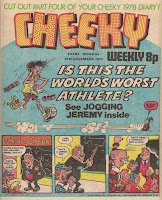 Jogging Jeremy is the featured character on this week's cover, in a depiction which is based on a panel from the first issue of Cheeky Weekly. Snail is back after being absent from the front page last week. A Dick Millington Cheeky's Week completes the cover fun.

On page 3 Skateboard Squad foil a bank robbery and are promised a big reward, with which they plan to buy each other Christmas presents. A caption at the end of their story tells us we can see what they buy in next week's comic.

Gran is also in seasonal mood, and embarks on a Christmas shopping spree. In trying to help people she causes damage that has to be paid for out of her Christmas money but, in a storyline that seems remarkably familiar, she foils a robbery and is given a reward.

On Tuesday, Cheeky has a classic encounter with Walter Wurx, just before getting another mystifying call from the Telephone Pole Man.

There's further festive fun with Mustapha Million, but mercifully no robberies are either perpetrated or foiled in the course of the story.


Bubblegum Boy has now perfected the art of speaking with a mouth full of gum, and makes a comment on Friday, although why he doesn't shout for help remains a mystery.

Cover star Jogging Jeremy makes a brief appearance on Saturday, before falling through the slats of a drain.

On page 30, Cheeky invites us to spend Christmas with him and his pals (who are depicted in a selection of cut and pasted images) in next week's Christmas issue.

Rounding off this week's comic is the final part of the cut-out 1978 diary.

The majority of the Cheeky's Week artwork this week is handled by Dick Millington (9 full pages plus What A Cheek and the Wednesday conclusion). There's a single page of Frank McDiarmid pencils (Friday), and a single-panel conclusion to Saturday that is cobbled together from two previously published panels by Frank, from the 29 October 1977 and 03 December 1977 issues. 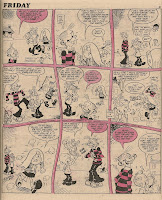 Let's hope that all this deputising and recycling has given Frank time to work on the Christmas issue. 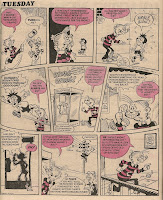 There are 2 character debuts in Krazy Town this week. On Sunday, Baker's Boy chips in a joke while Cheeky is having a gag with mechanic, making this one of the rare occasions where the Baker's Boy doesn't lose a cake to our hero. Posh Claude's mum makes her first appearance on Wednesday, although her voice has previously been heard in the 26 November 1977 issue.

Daffy Duck makes his feature debut this week. I don't care much for these Warner Brothers filler strips.