In this post I'm going to look at the Cheeky's Week artwork that I have attributed to 'Frank McDiarmid pencils' (FMP).  To quote from my earlier post here - 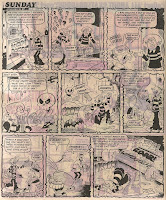 'I originally thought [some of the artwork in question] was by Tom Paterson but I got no support when I postulated this theory on the Comics UK forum.  However, RobFilth on the forum suggested that these pages may be Frank's pencils inked by another artist, and Lew Stringer put forward the idea that possibly Frank had an assistant to help him out at times.

My inclination now is that the art assistant suggestion is the most likely answer, so I'm going to record the artist for these pages, and similar-looking pages in later issues, as 'Frank McDiarmid pencils', unless anyone knows otherwise. My analysis of all the Cheeky's Week artwork shows that the combined Frank McDiarmid and Frank McDiarmid pencils artwork amounts to two thirds of the total, which is what Frank estimated his contribution to be when he was interviewed for Crikey!

I'm not suggesting that all the artwork in my FMP category is inked by the same artist.  What the artwork has in common (in my opinion) is a similarity to the style we know to be pure Frank (pages he signed are the obvious template), yet the art also has an element of un-Frank-ness about it, particularly in the lettering of the various gags written around the panels which are clearly not Frank's writing. 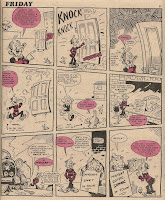 FMP art first appeared in Cheeky Weekly issue 4, dated 12 November 1977.  FMP were responsible for 11 of that issue's Cheeky's Week elements, with Frank providing the post-Creepy Sleepy Tale Wednesday strip on his own.  The two-panel conclusion to Saturday, reminding readers to call the Fun Phone, consisted of a previously-published Frank McD panel originating from the back page of the first issue, and another panel which looks as though it's the result of a cut-and paste job.

The following week, FMP were responsible for 5 pages, and in the next issue they delivered a whole Cheeky's Week.

This brings us to the 03 December 1977 issue, in which FMP artwork appeared on 11 elements.  In the 10 December issue the FMP count was down to 5 elements, one of which was the What A Cheek cover feature.

In the comic dated 17 December, there were 8 FMP elements, and the 24 December, issue had Friday as the only FMP art.

I'm pleased to say that the Christmas issue dated 31 December 1977 featured an all-Frank Cheeky's Week.  No doubt the assistance given to Frank by his inker(s) and Dick Millington in the issues running up to this one was intended to allow him time to generate a whole week of Cheeky festive fun on his own, for which we must all give thanks.

The first comic of 1978, dated 07 January, featured FMP across the whole of Cheeky's Week, but FMP then skipped a week and returned with 3 pages on 21 January.

28 January saw 4 pages of FMP art, and there was then a break until 11 February's 4 FMP pages plus Wednesday conclusion, followed by the 18 February comic which featured FMP art on What A Cheek and the final two panels of the Saturday conclusion on page 30.

FMP were responsible for 9 elements the following week, 25 February, but didn't return until 11 March, when they delivered the Wednesday conclusion only. The 18 March issue featured provided 7 FMP elements.  2 pages by FMP appeared in the issue cover dated 25 March, and a total of 5 elements appeared in the 01 April 1978 issue. 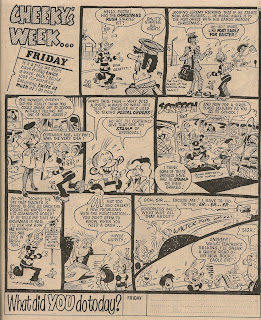 The Wednesday conclusion was the only FMP art in the 08 April issue, but FMP returned with 4 pages in the 15 April issue, followed by a single FMP page on 22 April.  4 pages of FMP appeared in the 29 April comic, and a further week was skipped before FMP contributed 7 elements to the 13 May issue.

The element count was back in double figures as FMP generated 10 elements in the 12 August 1978 comic, but dropped to 8 on 02 September before increase to 10 elements again in the 23 September issue. 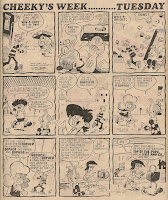 However, just as this pattern seemed to become established we encounter a month's gap, due in part to the non-publication of the comic for 3 weeks in December 1978 because of industrial action, with FMP not returning until the 06 January 1979 issue with a 9 FMP-element comic.

An even longer break then followed, with no more FMP art until the issue dated 14 April 1979, which featured 8 elements by FMP. 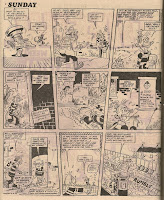 Email ThisBlogThis!Share to TwitterShare to FacebookShare to Pinterest
Labels: Frank McDiarmid pencils, The other Cheeky artists