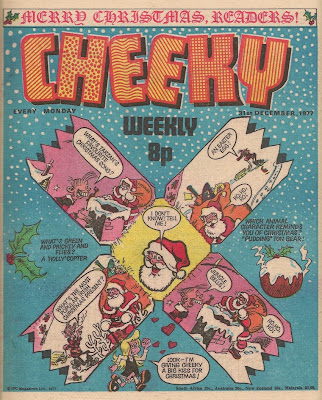 Happy Christmas, pals!  And so we reach a Cheeky Weekly milestone, the first Christmas issue. The front page dispenses with the British comic tradition of a snow-topped title, but Frank McDiarmid furnishes a seasonal, Christmas cracker-based cover with a nice falling snow background.

This is a great issue, with Frank firing on all cylinders as he delivers a whole festive-fun-packed Cheeky's Week.  Included are such treats as a group photo featuring the whole of the Cheeky clan (hope Flash Harry used the 'reduce tooth glare' setting on his camera), and Cheeky scoffing a huge slice of Christmas pud in front of 6 Million Dollar Gran on TV.  There's even a Cheeky's Week page in full colour.

Krazy Town looks very seasonal under a blanket of snow, although it poses something of a problem for Snail.  Even Gloomy Glad has the Christmas spirit, and everyone is looking forward to the Vicar's Boxing Day party.

As promised in last week's comic, in this week's Skateboard Squad story we discover which presents the Squad bought for each other with their reward money.  Er, skateboards.  Right.  However, the ingenious team find that by inverting their boards they can travel on the snow.

Sadly, it seems Snail doesn't get a look in with the Christmas grub, but he does get to read the rather unsatisfying concluding chapter of James Bold's first adventure, Fangs of Fear. Although Bold will be back with a new adventure next week, this is the final edition to show Cheeky having a sneaky bedtime read of a Bold novel.

At the Vicar's party there are 2 interlopers; Pongo Snodgrass from Krazy comic makes his only appearance in a Cheeky's Week's strip (although he will appear in a later Creepy Sleepy Tale and 6 Million Dollar Gran episode), and Billy Bunter, also in a one-off appearance, is assumed by the other partygoers to be Krazy's Micky Mimic.  Wipeout, the canine member of The Skateboard Squad, makes his debut as part of Cheeky's Week, but I'm not sure if he was invited.  Skatie from the Squad is also present in her second Cheeky's Week appearance (her first being in the 03 December 1977 issue), but Skipper seems to be absent. 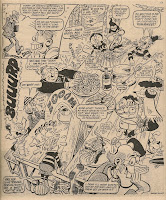 The comic ends on a cliffhanger - who will be the first person through the front door on new year's day?

As it's Christmas, I won't mention that on page 9, Cheeky's mum says that Dad gave Cheeky the racing game, when on page 2 we clearly see it's from Aunt Sarah. 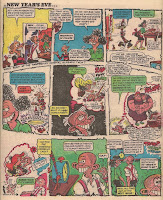