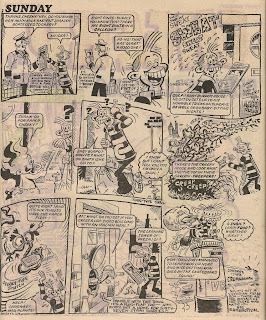 Snail was Cheeky's constant companion, accompanying him throughout the week, even into the cinema. A particularly fleet-footed gastropod (or fleet-podded gastrofoot), Snail would often be seen at Cheeky's feet in one panel, and atop the toothy funster's head the next. This head-borne method of travel benefitted Snail as he expended less energy while keeping up with his pal, and explains the slicked-down look of Cheeky's hairstyle.

The relationship between the two was rather odd, as Cheeky rarely acknowledged Snail's existence.  One such occasion took place in the 14 October 1978 issue, when Snail became love-struck on meeting an attractive female Snail.

The strip creators didn't give Snail the power of speech with humans, but readers could see his molluscy speech and thought balloons. He often became annoyed when the artist left him out of a few panels. 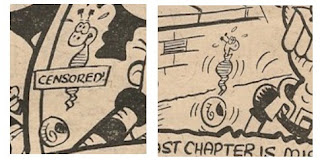 At moments of extreme stress, Snail would exit his shell at speed. Initially, these scenes were censored to avoid readers being confronted with a naked Snail, but occasionally a more liberal approach was in evidence and such occurrences were illustrated without editorial interference.


Some months into the comic's run, a competition was held to name the snail, although none of the winning suggestions were ever used in the strips.

Evidently a popular character, Snail eventually secured his own page in the comic, a feature entitled Snail of the Century. The title was a pun on TV's Norwich-based 'quiz of the week', Sale of the Century. In the strip, Snail was able to converse with the animal/insect occupants of Cheeky's garden, and the strip was basically the same joke-tastic tomfoolery as the Cheeky strips, but nearer the ground. 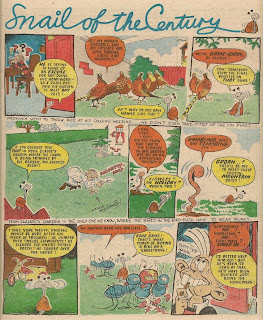