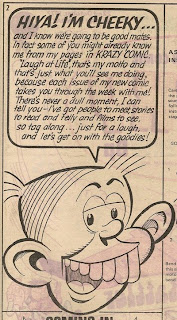 "What's the difference between an LP Record and a skunk?"

"One's a long player, the other's a pong layer!"

Cheeky's jokes didn't really get any better than that, but the readers of Cheeky Weekly didn't expect anything other than awful, corny jokes. It was the sheer number of Cheeky's jokes per issue that charmed us into submission.

With a toothy grin, prominent ears and a slicked-down short-back-and-sides that was surely unfashionable for the late 70s, Cheeky, like so many gawky kids before him, sought popularity by becoming the joker among his peers.

Cheeky would exchange banter with his pals, tradesmen, and authority figures. From vicars to teachers, parachutists to one-man bands, Cheeky was fearless in tackling any feed line he was given.

His creators realised there was a danger of portraying him as an insufferable smart-alec with an answer for any situation, and his vulnerabilities were regularly on display -

Puzzlement when the phone rang just as he passed by the telephone box. He was never lost for a snappy answer to the riddle he was given, but as he put the phone down, he never understood how someone could know he was nearby, not thinking to look up and see the man working on the telegraph pole.

Fear when delivering newspapers to the creepy house when a ghoul of some kind would answer the door.

Embarrassment at his pursuit by Louise, the girl who fancied him even though he would rebuff her with a comic put-down.

Thwarted plans when reading baby Burpo a Creepy Sleepy Tale, planning to frighten the toddler but always scaring himself.

He couldn't even put a shot past the goalie cat waiting in his front garden. 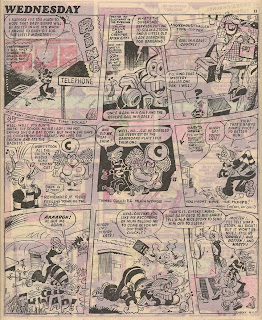 The toothy funster also displayed a rather parsimonious nature (probably inherited from Uncle Hamish), gleefully obtaining free cakes from Baker's Boy, and sneaking into the newsagent for a free read of the latest James Bold novel.

In the great comics tradition, Cheeky never seemed to change his oufit, permanently attired in a hooped jersey with a 'C' on the front. A knitting pattern for the jersey was eventually published in the comic, so that mums could turn out Cheeky lookalikes (although for the full effect, comedy false teeth would be required).

Cheeky was very rarely seen without his mollusc companion, Snail.
Posted by Niblet at 14:33