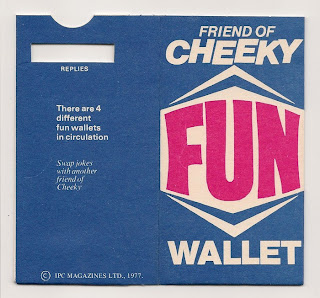 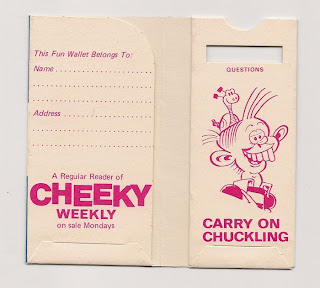 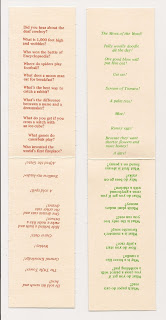 More in in keeping with the joke-fest nature of Cheeky Weekly than the Red Jet Rattler, the free gift in the second issue was the Friend of Cheeky Fun Wallet. This consisted of a self-assembly cardboard sleeve and two cardboard joke strips. The strips were inserted into the wallet in such a way that a feed line could be read in one window, with the hilarious tag line visible through another. The spare joke strip could be stored safely in the wallet while not in use.

There were apparently four different wallet/joke strip combinations given away. UPDATE 22 June 2022 - The Fun Wallet variants can be seen here.

Inside the wallet there is a space for the owner to proudly record their name and address, under which is the legend 'A regular reader of Cheeky Weekly', an attempt to instil in the possessor an obligation to buy the comic in perpetuity.

The wallet also introduces the concept of the Friend of Cheeky (a reader of the comic), which was to be used with the next free gift and on the letters page.
Posted by Niblet at 14:43