Many of the readers excitedly lifting a copy of the first edition of Cheeky Weekly from the newsagents’ counter would already have been fans of the titular toothy funster, having initially encountered him in the pages of Krazy, first published in October 1976. In that title the grinning gagster regularly appeared in two strips each week – as a member of the Krazy Gang, and also in his own feature entitled ‘Ello It’s Cheeky (later ‘Ello I’m Cheeky). Evidently he had proved popular enough to suggest to the management at IPC, publishers of Krazy, that he could sustain a title of his own.

Featured prominently on the cover of issue number one, alongside Cheeky’s tooth-crammed fizzog, is the traditional launch edition free gift – In this case the Red Jet Rattler. Also honoured with a front page appearance are the titular tittermesiter’s mollusc mate, Snail, and the toothy funster's airborne associate, Bubblegum Boy, both of whom are regulars in Cheeky’s starring strip in Krazy. At the foot of the front page is a 3-panel strip entitled What A Cheek in which Cheeky shares a gag with another stalwart of his Krazy strip, mirthful mailman Postie.

Flipping over to page 2 we’re welcomed by Cheeky, who explains that ‘Each issue of my new comic takes you through the week with me!’ and that ‘I’ve got people to meet, stories to read and telly and films to see, so tag along’. Alongside our toothy pal’s introduction are the instructions for assembling the free gift, placed near the front of the comic for the benefit of those impatient to get their cardboard aircraft into the sky without delay.

Page 3 is titled Sunday, and we accompany Cheeky on his paper round, during which he trades gags with new character Milkie, and Manhole Man who we’re familiar with from Krazy. He also delivers a paper (The Sunday Spook) to the creepy house, something (as is the case with the paper round) that we’ve never seen before. In the final panel Cheeky is almost run down by what he refers to as the Skateboard Squad, although all we see is clouds of dust as the speeding team pass within inches of our apprehensive hero.

The next page begins, without the traditional title panel, as a trio of skateboarders roll into Krazy Town park (yes, the events in the new comic take place in the same area as those seen in Krazy) in response to a distress call. Thanks to a bystander, we are informed that the intrepid speedsters are indeed the Skateboard Squad, who go on to rid the play area of some bullies.

Following the high-speed excitement, we turn the page to discover that it’s now Sunday evening as Cheeky enjoys a gag with another new character, the Vicar, and the obligatory pee joke with Krazy veteran Walter Wurx before retiring to bed to read his book entitled Fangs of Fear. 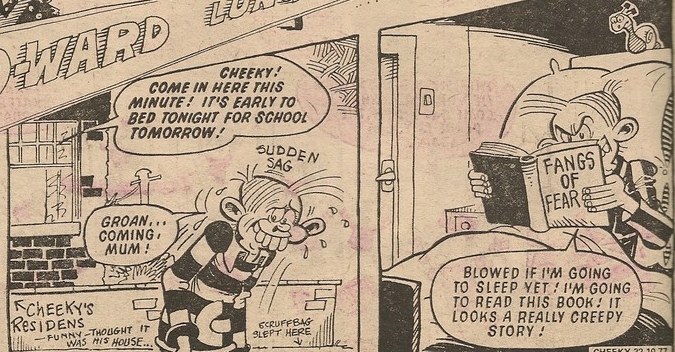 A striking double-page spread of Massimo Belardinelli artwork ensues, introduced by a caption that reads ‘And this is what Cheeky read...’(once again there is no traditional title panel) The story stars James Bold, investigator of the supernatural who heads off to get to the bottom of some diabolical goings-on at the forbidding Grimstone Grange. Unlike the humorous strips seen earlier in the comic, this is a dramatic, spooky tale which ends on a (literally) gripping note as a young woman is grabbed by ‘a pair of hairy hands’. The second page concludes, immediately after this cliff-hanger moment, with Cheeky’s mum turning off his bedroom light, curtailing his evening’s reading, although a caption promises he will continue to read the book next week.

Over the page we’ve reached Monday, and the fun commences with our toothy pal emerging from school at high velocity, telling us ‘I’ve got to get home in time to see the Six Million Dollar Gran on the telly!’ On his journey he meets a character we’ve never seen before – the luscious lollypop lady, Lily Pop. With her assistance, Cheeky safely traverses the busy road and gets home just in time to be able to switch his TV on in the final panel.

Underneath text reading ‘This is what he saw...’ 6 Million Dollar Gran’s first TV episode (we know it’s on TV because the title panel is in the form of a cathode ray tube) is screened across the next 3 pages. The story of advanced robotics and industrial espionage is played for laughs, and at the conclusion Cheeky is seen watching a caption on the gogglebox reading ‘End of Episode One – Tune in Again Next Week’.

Next up we’re back with Cheeky, and it’s now Tuesday. Emerging from his house, Cheeky decides to meet his dad as he finishes work. Pausing only to kick a tin can towards a loitering moggie, our pal heads off across Krazy Town, meeting Jogging Jeremy and Spiv along the way. He also encounters his Krazy Gang comrade Sporty, who returns some comics that Cheeky lent him. Cheeky’s dad is dismissive of the funny papers, telling his son ‘You wouldn’t have caught me reading comics when I was your age’. In the final panel we see Cheeky, having returned home, mounting the stairs and looking scornfully at his flat-capped pater while muttering ‘I’ve discovered something that he doesn’t know that I know’. This is the lead-in to the following page, in which the toothy funster, now ensconced in the loft, lifts the lid of an old chest and explains that it contains his Dad’s old comics. Below this is a reprint of a 1949 ‘Mike’ page from Knockout.

Overleaf, Cheeky is able to slam the lid of the chest just as his dad enters the loft, and our toothy pal makes a swift exit, meeting Doodle Doug. We then witness Doug’s (rather violent) doodle.

Page 15 is the location of What’s New, Kids, in which our toothy pal tells us about a variety of books, model kits, films and board games that we might want to add to our birthday/Christmas gift lists.

Pages 16 and 17 are of course the centre of the comic, which is the location of a Pin-Up Pal poster of our grinning gagster mate, who is depicted on a speeding skateboard alongside his slithering sidekick who is of course travelling on his own miniature conveyance.

Cheeky’s Wednesday commences with him dejectedly heading towards his babysitting appointment with Baby Burpo, the terrifying toddler we're familiar with from Krazy. As he slouches past a telephone box, our hero lifts the ringing handset and is told a joke. The puzzled punster emerges from this encounter wondering how the caller knows he just happened to be passing, unaware of the telephone engineer working on the pole above. On arriving at Burpo’s house, Cheeky falls victim to a booby trap set by the belligerent baby, and then commences to read a scary bedtime story to his infant charge in the hope that giving the sinister sprog a bad case of the heeby-jeebies will result in Cheeky’s babysitting services being cancelled. The story Cheeky has selected, which plays out over the next 2 pages, commences with Little Miss Muffet and associated spider. Deviating somewhat from the nursery rhyme, the tale then sees the arachnid eat Miss Muffet, and then go on to consume Humpty Dumpty, Little Boy Blue and a number of other traditional characters. Cheeky’s ruse fails as Burpo enjoys his bedtime tale, and a thwarted Cheeky departs for home, not noticing a giant eight-legged beast looming in the darkness behind him.

Over the page we witness Cheeky emerging from his house on Thursday, having enjoyed his tea consisting of sausages, chips and a triple helping of beans. Snail contributes the inevitable fart gag, then the toothy funster has humorous encounters with Herman the traffic warden, Bump-Bump Bernie and the commissionaire at the local posh hotel before being invited in by Oscar to see his latest home movie. Readers also witness this farcical footage as it plays out, not entirely as its young director would have liked, on the following page. 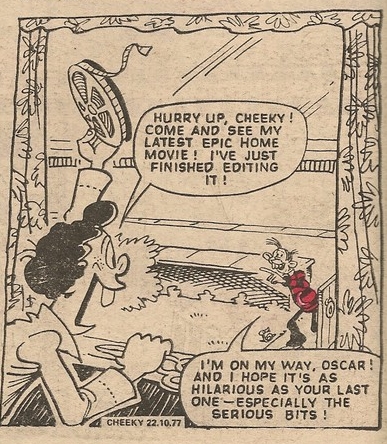 There’s an air of mystery evident on Friday, as Cheeky is conspiring with his schoolmates to arrange a clandestine rendezvous at the dentist. Nosy Norah is on the trail of our punster pal as he visits Granny Gumdrop’s shop, all the time adding more youngsters to the gang of school pals accompanying him. The crowd of kids eventually convene in the dentist’s waiting room and the object of their visit becomes clear – they have come to get a free read of a particular comic which is among the reading material on offer to nervous patients, and is not available elsewhere.

Mustapha Million, a strip residing within that mysterious publication, is featured over the page, introduced with a caption reading ‘And this is what the gang read’.

Following Mustapha’s 2-page escapade, we meet Cheeky again to witness his Saturday pursuits. On his way to the Saturday morning picture show at the cinema, our toothy pal has quick gags with Mechanic and Sid the Street-Sweeper. Joining the queue outside the picture palace, Cheeky is subject to the cacophonous compositions emerging from Buster the Busker’s array of instruments, until the Commissionaire announces that the cinema doors are open. A stampede ensues, and over the page is a 2-page story featuring Wile E. Coyote and Roadrunner (referred to in the title as Beep-Beep). This strip is presented as the animated cartoon enjoyed by the youthful cinema patrons. As the ‘That’s All, Folks!’ caption fades from the screen, we’re returned to the cinema interior where Cheeky encounters Ursula the Usherette, and noisy nosher Crunching Chris. The room then darkens as the title ‘Space Family Robinson’ flickers onto the big screen.

The first episode of this science fiction serial plays out over the next 2 pages, following which we sadly find that overleaf is Cheeky Weekly’s back cover, where we witness the toothy funster and his pals emerging from the cinema. The free gift that will be available in the second issue of Cheeky’s new comic is given a plug (with a rather disturbing pictorial accompaniment), before Cheeky signs off, having sagely advised us to place a regular order.

What a cracking first issue! It's gratifying to see so many pages drawn by Frank McDiarmid, who Krazy readers strongly associate with Cheeky. Frank's energetic work is a delight, with plenty of extra gags packed into the busy pages. It's great to see that the already extensive supporting cast of idiosyncratic Cheeky's Week characters has been expanded to increase the fun quotient. The impressive feat of having all the non-Cheeky strips linked in various ways into Cheeky's week, giving the whole issue an ongoing narrative, is something we've never seen before and it's clear that the creative team behind the issue have put more effort into this comic than into the average title - effort that has certainly paid off. I don't know about you, but I'm definitely going to buy issue 2!