Postie had the honour of being the first of Cheeky's pals to feature in the What a Cheek cover strip, on the front of the debut issue of Cheeky weekly.  The perky post person was a regular in Krazy's 'Ello It's Cheeky pages, so he was possibly allocated the front cover slot in Cheeky's first issue to reassure prospective purchasers who had previously read Krazy that the 'Ello It's Cheeky-style humour they had enjoyed would continue into the new comic.  Postie returned to the cover of Cheeky Weekly one further time, in a single-panel joke crammed into the corner of page 1 of the 18 August 1979 issue.

In total, the merry mailman appeared in 27 issues of Cheeky Weekly, not quite making it to the end of the comic's run, his final appearance being in the 19 January 1980 issue which was just 2 weeks short of the last issue before the merge into Whoopee!

Postie's function on the majority of occasions he appeared in Krazy had been to ask Cheeky to write a limerick about a different subject (often a town or county or, in later issues, a reader's name) each time.  In Cheeky Weekly his role altered somewhat and he became a source of mail-related jokes and puns. 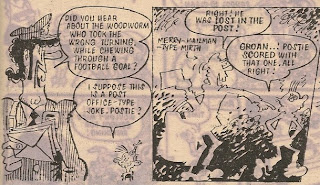 In the Christmas 1977 issue we got a rare glimpse of an off-duty Postie, yet as a guest at Cheeky's new year party in the 06 January 1979 issue, the daft delivery man was in full uniform.  However, he was in civvies again for the new year party in the 05 January 1980 comic.
Postie featured every day during Cheeky's Week (well, every day except Sunday, which was presumably his day off) in the 18 March 1978 issue.

In the 15 September 1979 issue we learned that Postie is Do-Good Dora's uncle.

Despite the honour of being the first character to swap a gag with our toothy hero in Cheeky Weekly, postie didn't appear on a Pin-Up Pal poster, nor did the larking letter-deliverer get to feature in a Burpo Special (although he was the subject of the Krazy equivalent, Cheeky's Pal, in the 20 August 1977 issue of that comic).

The longest Krazy Town went without a postal delivery was the 17 weeks that elapsed between Postie's appearance in the 15 July 1978 issue and his return in the comic dated 11 November 1978.