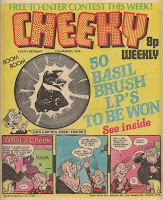 Boom-Boom!  Furry funster meets toothy funster this week as Basil Brush dominates the cover in a rather poorly-reproduced black and white photo.  The printing process on IPC comics of the time was not good at handling photographs, so maybe a colour drawing of wily Basil would have been more effective.  However, as the funny fox at one time had his own strip in rival publisher Polystyle's TV Comic and was featured in a series of annuals in the late 70s, maybe there was a rights issue that meant only a photo could be used.  Or more likely a photo was cheaper.  Anyway, a competition to win copies of Basil's LP, Boom-Boom! It's Basil Brush, is announced.  The What A Cheek strip sees Cheeky indulging in classroom fun, and Teacher's hair has gone white with the strain of it all.  Snail is seen climbing the edge of a panel. 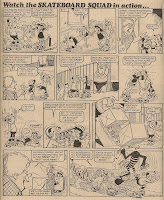 On the Sunday page, Jogging Jeremy tells Cheeky that he's going to set a record for the number of circuits of Krazy Town, and the toothy funster monitors the feeble fitness fanatic's progress throughout the following seven days.

Skateboard Squad are involved in a rather lacklustre tale of delivery problems, and the careless boarders run Cheeky over at the end of the story.


On Monday our grinning pal enters the newsagents and discovers a new James Bold novel (he'd read the final chapter of the previous Bold adventure last week).  The toothy funster's anticipated free read is foiled when he's discovered by the newsagent and ejected from the shop.  The absence of James Bold in this week's comic is due to the fact that a whole page is allocated to listing the 500 'Friend of Cheeky' T-shirt winners, from the competition in the 26 November 1977 issue, and the Basil Brush competition takes up half of page 11. 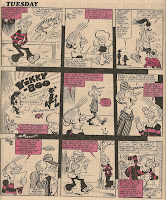 In the final panel of the Tuesday page we learn that Cheeky and his dad are both readers of Whoopee!, before our dentally-challenged hero heads up to the attic to peruse a page from Swift, 1954. 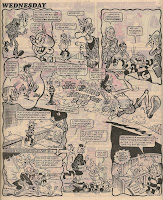 There is no 'pure' Frank McDiarmid art in the Cheeky's Week features this issue, although Frank does the honours on the Pin-Up Pal poster.  Barrie Appleby makes his first contributions to Cheeky's Week, furnishing us with art on 6 elements, while Unknown Cheeky Artist 1 contributes his trademark bird and hot air balloon in another 6 elements, and Frank McDiarmid pencils contributes the conclusion to Wednesday.

Madcap medic Doctor Braincell makes his debut in this issue.  Daffy Duck flies off for good.