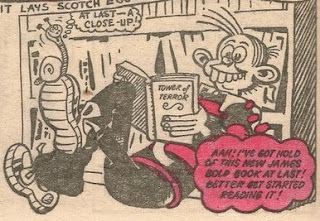 Cheeky began reading the third James Bold tale, Tower of Terror, in Cheeky Weekly issue 22, dated 18 March 1978. The previous Bold adventure, The Ghost Highwayman, had ended in the 04 March 1978 issue, but the following week the Bold strip was bumped from the comic by a page of competition results and a competition to win Basil Brush records. This was the only break in the series of Bold escapades which ran from Cheeky Weekly's debut issue until 05 August 1978 (although Bold did continue to appear thereafter in the Cheeky annuals).

Having had a week to recover from his encounter with The Ghost Highwayman, a refreshed Bold and assistant Angel O'Mercy embark on his next perilous investigation, into the terrifying events at Headland House… 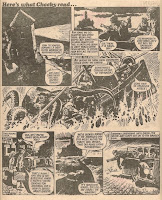 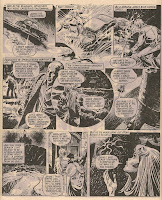 Angel sees the creature climb into the tower through an open window, but by the time Bold looks up the thing is gone.  Doubting what she had seen, Angel follows Bold into Headland House, where they find a table laid for two and a mysterious note of welcome.  Just as our hero starts to partake of the food, Angel notices that the eyes in all the portraits adorning the wall have turned to focus on her, and something is scratching at the window.

The couple are then distracted by the arrival of a car, and move outside to find the occupants are film director Marcus Crane and his actress wife, Edwina.  Suddenly, a black shape leaps from the tower above and crashes into Angel, who is relieved to discover her assailant is nothing more sinister than Edwina's cat, Sheba.

Explaining that he laid out the food to welcome his wife to their new holiday home before leaving to collect her from the local station, Crane invites Bold and Angel to join them for supper.  During the meal, Angel is struck by the sinister air of their hosts.  Crane, doing nothing to assuage her fears, insists that she and Bold stay the night at Headland House, averring "There is no danger in this house.  No danger at all!"

After supper, our supernatural investigators are shown to their rooms, Angel in the east wing, and Bold in the west.  Crane gives Bold a copy of his latest film script, entitled Bats of Bellonia.  The ghost-hunter, unable to sleep, flips through the script and finds that a scene involving mysterious organ music melds into real life, as he hears the sound of an organ coming from outside his room.  Following the echoing chords, Bold enters the music room to see a cowled figure seated at the keyboard.  As the figure turns, Bold is shocked to see there is no face inside the hood.

Our hero rips a sword from the wall and lunges at the mysterious musician, determined to learn whether it really is a ghost.  The figure jabs a special button on the keyboard, and gas seeps from the organ pipes, overcoming Bold, who regains consciousness some hours later, now alone.

Finding the door locked, Bold exits through the window and climbs out onto the ledge.  As he edges along the narrow parapet, with waves crashing on the rocks far below, Bold is shocked to see Angel a few feet away on the same ledge.  As he approaches her, Angel explains that she had climbed out of her window when gas started entering her room through a ventilator grille.

Bold attempts to climb inside another room, but finds it full of bats.  The leathern-winged denizens of the night stream to freedom through the open window, toppling the two ghost-hunters from their precarious position and into the sea.

As Angel plunges into the roiling waves she sees the tentacled creature that she first spied climbing Headland Tower, rising to the surface.  She hauls herself onto a rock, but is plucked from her perch and held aloft by the cyclopean horror.  Bold mounts the rock and, snatching up a piece of driftwood, lays into the monster, which shatters and catches fire.  Our heroes have no time to reflect on this surprising event, as a horde of the tentacled terrors emerge from the waves, forcing Bold and Angel to strike out for the beach below Headland House.  Our heroes make for a door only to find that it's locked, but much to their relief they realise the eight-legged fiends are heading away and up the side of the tower.

The steel-nerved ghost-hunter kicks down the door and he and Angel enter to find Crane and Edwina rehearsing a scene from Bats of Bellonia.  Crane explains that in this part of the film, two intruders enter a room and find a trap has been laid for them.  The script mirrors Bold's predicament as Crane's savage dogs attack our heroes, who are forced into a lift that descends to the basement.

Bold and Angel emerge into a room strewn with wooden chests.  Angel opens one, and finds a coiled snake inside, about to strike.  Crane's image appears on a TV monitor and explains that the snake is the guardian of his private vault, and Angel will not live long enough to discover his secrets. 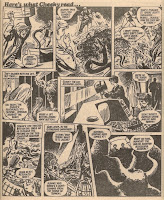 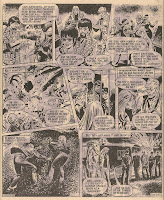 Well once again we find that supposedly supernatural events are entirely man-made.  Will Bold ever encounter a real ghost, rather than some nutcase with an unnecessarily elaborate nefarious scheme?

I expect that this Bold story, like Bold's first adventure (and, I'm guessing, the second), was based on a Maxwell Hawke strip that originally appeared in Buster.  Looking through the list on the Buster comic website, I would guess that Tower of Terror was a rehash of Maxwell Hawke and The Haunted Headland, which ran in Buster from 04 May to 29 June 1963, a total of 9 weeks assuming there were no breaks.  Tower of Terror ran for 6 weeks, with the concluding instalment in Cheeky Weekly dated 22 April 1978.

Like the previous Bold thriller, the framing device for Tower of Terror saw Cheeky sneak a weekly free read of the James Bold novel in the newsagents.

I assume that the art on the run of Tower of Terror was again by Mike White, who drew The Ghost Highwayman, but I'm no expert on adventure artists so if anyone knows different, please get in touch.

You can view my work-in-progress summary of all the Bold adventures here.
Posted by Niblet at 15:24