A letter from Cheeky

Many thanks to blog reader The 5th Man, who has been in touch about a letter he received from the Cheeky Weekly office.

5th (as he's known to his friends) was evidently very successful at getting items published in the comics of yesteryear, having his cartoons printed in Jackpot and Whizzer and Chips.

Thus it was in late 1979, and with great excitement, 5th sent a joke off to Whoopee!, and even greater excitement ensued when the joke was printed in the 03 November 1979 issue of that comic

However, after several weeks the prize money hadn't arrived, so 5th wrote to the Whoopee! office, probably around the time that Cheeky Weekly merged into Whoopee! judging by the comments in their reply, which can be seen below. 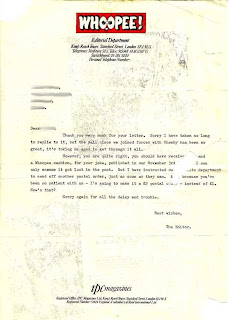 The letter mentions the large amount of mail received since the merge with Cheeky Weekly.  No doubt they were swamped with letters from erstwhile Cheeky Weekly readers complaining about the loss of their comic, and from loyal Whoopee! fans saying 'What's all this Cheeky rubbish filling our comic now?'

Still smarting at the inefficiency of those fools at Whoopee! (they couldn't even spell 'reply' properly), 5th felt it necessary to take his complaint to the top person at IPC, so dashed off a letter to Cheeky, explaining what had happened, no doubt stressing that the deprivation of his Whoopee cushion had caused great anguish.  A sympathetic soul in the office grabbed some redundant Cheeky Weekly stationery and typed a conciliatory missive in the guise of the toothy funster himself.  Unfortunately, and not a little ironically, the composer of the letter got 5th's name wrong, calling him Kenneth not once but twice. 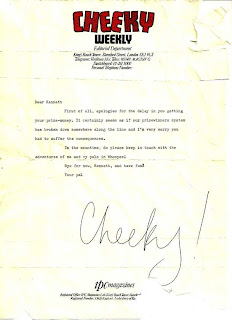 Despite being scarred by the whole experience, 5th is hoping to find a copy of Whoopee! dated 03 November 1979.  If anyone out there has a copy for sale, or can scan it, please get in touch with me at the email address at the top of the page.
Posted by Niblet at 15:10

Email ThisBlogThis!Share to TwitterShare to FacebookShare to Pinterest
Labels: Letter from Cheeky