Supposedly amusing national stereotypes were common in the media during the 60s and 70s.  It seems shocking to us now that 'humour' of this type even extended to children's comics, but we must acknowledge that a number of Cheeky's pals were presented in ways that would be considered inappropriate today.  One such was Gunga Jim, who appeared in 62 issues of Cheeky Weekly.

This blog's mission is to take a detailed look at Cheeky Weekly, so it's necessary to examine all aspects of the comic, even those which are less palatable to current tastes.  I therefore present this post as a document of less enlightened times.

Jim, whose name was of course an allusion to the unfortunate water-bearer subject of Kipling's poem Gunga Din, first appeared in the issue dated 21 January 1978.  He was featured sporadically thereafter, his puns on the word curry or Indian city names often delivered in a 'comic' speech-pattern.  Jim's catchphrase, uttered when he made what he considered to be a particularly successful joke, was "Oh curry-curry, hot stuff!"


Unlike some characters who were elevated to 'guest star' status in an issue of the comic by being featured throughout Cheeky's Week, Jim never appeared in more than 2 elements in any issue.  He achieved a place on the cover on 6 occasions, once as Cheeky's stooge in 17 March 1979's Cheeky's Week, and 5 times thereafter, when the Cheeky's Week feature had been replaced by a single front page joke.

In the early days of Cheeky Weekly, several of Cheeky's regular pals would be seen among the toothy funster's classmates whenever the action moved into the classroom.  As the comic neared the end of its run, Jim was quite often the only recognisable character among a bunch of anonymous schoolkids. 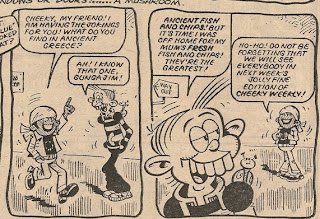 Jim never appeared in the 'Ello It's Cheeky feature in Krazy, and his final foray into Cheeky Weekly was in the issue dated 05 January 1980.


Count of elements by artist
Posted by Niblet at 15:54