Don the Dustman made a single appearance in Cheeky Weekly's run.  On Christmas morning in the 31 December 1977 issue he gave Cheeky the feed line for a gag while helping himself to one of the toothy funster's chocs.  Possibly the script writer felt that already-established refuse disposal character Short-Sighted Dustman, who by this time had appeared in 3 issues, was not really appropriate for this joke since there was no nearsighted aspect to it. 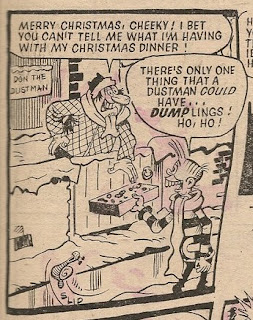