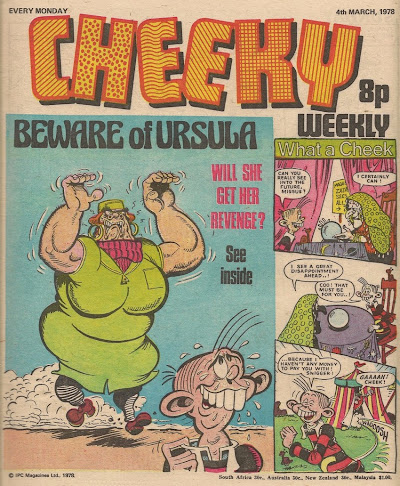 Issue 20 of Cheeky Weekly features hulking cinema usherette Ursula on the front cover, apparently bent on revenge for Cheeky's merciless jibes about her appearance.  This artwork appears to have been specially produced for the cover, rather than taken from a panel within the comic as we have become used to.  The What A Cheek strip, running vertically down the page this week, features a fortune-teller-type joke.  Krazy Town's resident psychic, Crystal Belle, won't make her first appearance until July, so instead Cheeky's partner for this gag is one Madame Zaza. 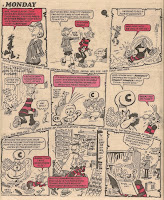 Monday sees Cheeky sneak into the newsagents under the cover of Milkie, to read the thrilling final instalment of James Bold's current adventure, The Ghost Highwayman. 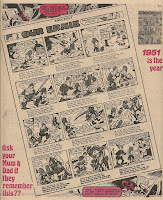 Burpo is again uncharacteristically helpful to Cheeky on Tuesday.  Now our toothy hero is REALLY getting worried.

Freaky, the alien member of Krazy comic's Krazy Gang (the gang of course numbers Cheeky among its human members), pops up on the What's New, Kids page to plug the current issue of Krazy, which is a space special.

On Wednesday, it becomes clear why Burpo has been well-behaved all week. 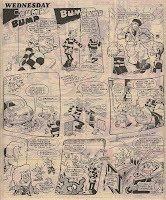 Burpo's pre-birthday truce comes to a violent end after this week's Creepy Sleepy Tale, as the terrible toddler uses his teddy bear to batter Cheeky about the head.

Devious, grudge-bearing Burpo takes his revenge during the rest of the week. He helps the Baker's Boy to win his bet with Cheeky on Thursday, and on Friday tells Nosy Nora where to find The Mystery Comic, so that the toothy funster has to wait until she's finished reading it.  The fiendish tot arranges for Cheeky to stand in for the commissionaire on Saturday, resulting in our grinning pal being trampled underfoot when the cinema doors are opened.

The belligerent babe is also the engineer of Cheeky's humiliation by Ursula, as heralded on this week's cover, during a rather shocking cinema interval.  Cheeky can dish it out, but can he take it? 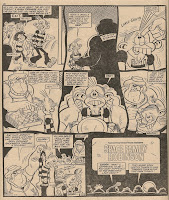 Cheeky finally capitulates and gives Burpo a belated gift in the final 3 panels of this week's issue.

There is no Pin-Up Pal poster this week, as the back cover carries an ad for Hovis bread, giving details of a promotion that invites consumers of said loaf to send in four wrappers and receive in return four free tickets to a Saturday morning cinema show at ABC cinemas.  Despite being on the back page, this ad is not in colour.