Anyone unfamiliar with the intricacies of Cheeky's Week may have been puzzled by the references to the 'Suddenly' feature in my previous post.

The Suddenly feature is part of the framing device surrounding some of the James Bold tales in the comic.  In the first 11 issues, readers joined Cheeky as he read the original Bold tale, Fangs of Fear, in bed.  However, for the second Bold adventure, Cheeky regularly sneaked into the newsagents for a free read of the new James Bold novel, The Ghost Highwayman.  Each week Cheeky's reading was interrupted by the newsagent, who would snatch the book away and eject Cheeky from the shop (always at a moment of peak excitement in the novel, of course).

The first Suddenly page, in the issue dated 07 January 1978, was not named as such, but the equivalent page in the following week's comic was headed 'Suddenly, Cheeky's reading was interrupted…'.  I have adopted the name Suddenly for all pages in the comic where Cheeky's clandestine reading is cut short.  OK, I know that in the 25 February 1978 issue the page was titled 'Cheeky's reading came to an end', but I'm sticking to Suddenly…. 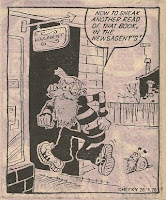 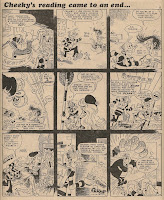 In preparing the 28 January 1978 issue there must have been an artwork crisis. The first panel of the Suddenly page is a reprint of the first panel from the 07 January Suddenly, but with a different newsagent's speech balloon, and the majority of the rest of the page is taken up with 2 mazes. In the final panel of the same week's Monday page, before Cheeky began reading, Cheeky is seen sneaking into the newsagents in a false beard. In the issue dated 25 February 1978, the newsagent apprehends a bearded Cheeky, so this page is presumably the artwork that was originally intended for the 28 January issue.


On 11 March 1978 Cheeky is caught before he even starts reading, and consequently there is no James Bold feature that week (the previous story had finished the week before, and Bold's novelised adventures would resume with the first episode of Tower of Terror the following week). 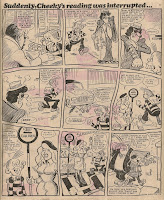 Cheeky's sneaky newsagent-reading saw him peruse 3 Bold adventures. The final Bold story to be enjoyed by Cheeky in novel form, The Frightened Village, ended on 24 June 1978.  The Suddenly feature came to an end the same week, because Island of Fear, Bold's last adventure to appear in Cheeky Weekly, was presented as a film series which Cheeky and his pals watched on Saturdays.

How many newsagents have shelves of books, anyway?

Following tables REVISED 10 September 2010 'cos I had the Suddenly feature dated 07 January 1978 recorded as Monday in my data when I originally ran the figures.