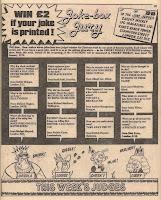 Named after venerable TV show Juke-Box Jury, on which a panel of celebrities would vote a selection of new record releases to be either a Hit or Miss, Joke-Box Jury saw a rotating group of Cheeky characters delivering their verdict on the jokes sent in by readers.  The jury was never negative, and emitted such giggles, chortles, sniggers and guffaws as they felt appropriate.  Even Gloomy Glad sat on the Joke-Box Jury, looking suitably amused, in the issue dated 23 September 1978.

Submissions for this feature were first invited in the second issue of Cheeky Weekly, where readers were asked to call The Fun Phone with their jokes.  Joke-Box Jury first appeared in issue 8 of the comic and appeared in all but 11 issues of the remainder of the comic's run.  86 Jury features covered one page or part thereof, and 12 were 2-pagers.  In the 27 October 1979 issue, J-B J was spread over 3 pages, with a half-page on page 7, and 2 full pages on 20 and 21.

The Joke-Box Jury page in the comic dated 31 December 1977 announced that the Fun-Phone would be taking a break, and details of the re-opening of said telephonic amusement device would be announced in the issue dated 07 January 1978.  However, the announcement in that issue says that 'Due to a technical problem we cannot reopen the Fun-Phone just yet'.  The announcement asked readers to post their jokes in the meantime.  In fact the Fun Phone was never to return.  Presumably the 'technical problem' was either a large number of complaints from parents faced with inflated phone bills, or staff in the Cheeky Weekly office being exasperated with pesky kids phoning in and larking about ('Hey, Mister, can I speak to Lily Pop?'). 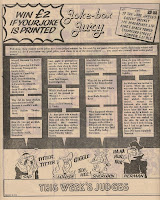 Some of the jokes that were printed would be considered inappropriate today, but those were very different times, when 'humour' of that type was common in the media and schools, workplaces etc.  I apologise if anyone finds some of the jokes in the example pages offensive, but they are presented as a document of a less enlightened era.

There was a £2.00 prize for those whose jokes were published, and this remained unchanged for the entire run of the feature which, in a time of double-digit inflation, seems a bit stingy (the cover price of the comic rose from 8p to 10p in the same period).

A quick web search suggests that the British version of Juke-Box Jury finished in 1967, although it was revived in 1979 and again in 1989.  The play on the title would therefore be meaningless to most Cheeky Weekly readers when the feature started, so maybe it was aimed at their parents.