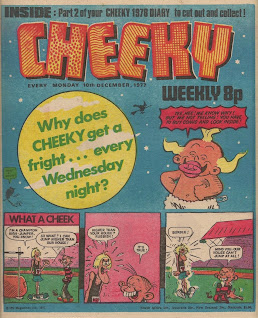 Baby Burpo is featured on the cover this week, with a reference to Cheeky's regular Wednesday night fright, resulting this issue from a Creepy Sleepy Tale of an ancient Egyptian mummy.

In the What's New, Kids advertising feature, Cheeky introduces two mechanical characters from a new film.  Their names are R2D2 and C3PO, and the film is apparently called Star Wars.  Wonder if it will prove popular. 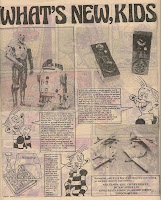 Page 30 sees Cheeky present a coupon soliciting readers' views on Cheeky Weekly.  Under a banner making the sinister claim that 'We have ways of making you talk', the coupon asks readers to rank the non-Cheeky's Week features, and to comment on which of Cheeky's pals they like and dislike. The strip that accompanies this feature uses a crude rehash of a Reg Parlett Mustapha Million panel from the first issue of Cheeky Weekly, in what looks to me like a cut-and-paste job.

There are six pure Frank McDiarmid pages this week, plus the three-panel conclusion of Wednesday. 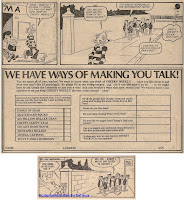 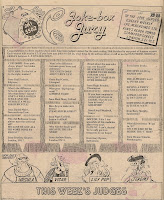 Two characters make their debut this week.  School gardener Dan-Dan the Lavender Man makes his first compost-encrusted Cheeky Weekly appearance on Sunday, along with Milkie's assistant who, having served his purpose in setting up a joke with the punchline 'one's a milk roundsman and the other's a round milkman', is never seen again.

A notable feature to debut this week is Joke-Box Jury.