Claude felt he was a cut above the riff-raff that populated Cheeky's Week. Strutting around Krazy Town in his school cap and blazer, Claude would be accused by Cheeky of having a lifestyle that was one of moneyed extravagance.  The truth would then be revealed, often in comments made by Claude's mum, and Claude would suffer embarrassment as a result. 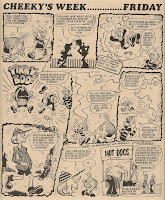 Claude's mummikins was indeed posh and had a Rolls Royce and fur coats, but his daddikins was shown to be a street vendor of hot dogs.  However, we see a different father driving the Rolls Royce.  Very strange.

The scriptwriter wasn't averse to recycling posh jokes, either. 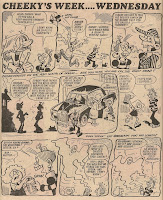 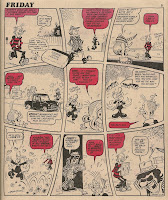 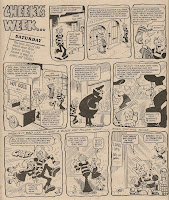 Posh Claude - Number of appearances by Page
Posted by Niblet at 15:52