One of the more obscure of Cheeky's pals, the parachutist appeared in 10 issues of Cheeky Weekly, early in the comic's run.  Like most of the cast of Cheeky's Week, the parachutist (code name 003 and-a-half) was essentially a one-joke character.  In his case the joke was that he was carrying out a daring covert operation, but each week touched down either at the wrong time or the wrong location.

Parachutist appeared weekly from 29 October to 26 November 1977.  His parachuting skills evidently got even worse the following week as he missed the 03 December comic entirely.  However, he was featured twice in the comic dated 10 December 1977, on Sunday evening and Thursday, two unrelated aeronautical mishaps. 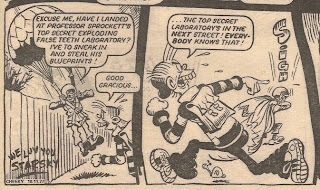 We can only assume he was on a deep cover mission for some months, as his next landing was not until the comic dated 13 May 1978.  In this issue, the parachutist crashed through Cheeky's roof into the attic and prevented Cheeky's regular look at his dad's old comics.  This gross incompetence apparently resulted in his licence to thrill being revoked, as that was the parachutist's final appearance.

Parachutist - Number of appearances by Element

Parachutist - Number of appearances by Page
Posted by Niblet at 16:21