In the early days of World War 2, as a beleaguered Britain faced shortages of essential supplies, the UK government introduced a system of rationing to control the distribution of commodities such as food and fuel.  The British population was issued with ration books without which they were unable to legitimately buy the items that were subject to restriction.

Into this tightly-controlled marketplace stepped criminals who would 'obtain' sought-after goods and offer them at inflated prices to the public.  These black-marketeers came to be known as spivs or wide-boys.  While rationing was in effect, the dangerously glamorous spiv, with his rakish moustache, loud tie and sharp, American-style suit, became a familiar figure in British popular culture and was often presented in a humorous context.  Comedian Arthur English had an act based on the typical spiv (and featured in a comic strip in Radio Fun - an example can be seen on Lew Stringer's blog), and George Cole memorably played wide-boy Flash Harry in the early St Trinians films.

By the time WW2 came to an end in 1945, Britain's economy was severely weakened, so rationing continued into the post-war years.  Restrictions were gradually lifted, and the use of ration books ceased altogether in 1953.

The target audience for Cheeky Weekly was born long after wide boys disappeared from Britain's streets.  However, British kids of the late 1970s would have been familiar with spiv Private Joe Walker as portrayed by James Beck in the BBC's TV comedy set in the war years, Dad's Army.

Cheeky Weekly's Spiv would usually be found emerging from an alley that often had a punning name, such as Muhammad Alley or Cleo Lane, and attempting to sell some dodgy gear from his suitcase.  Cheeky always had a smart reply to the spiv's sales patter - the toothy funster only ever bought two items from the dodgy dealer; a copy of The Mystery comic in the issue dated 01 April 1978 (the amount Cheeky paid wasn't revealed), and a sketch pad in the 15 July 1978 comic.  Spiv appeared in the first issue of Cheeky Weekly, and departed after his appearance in the issue dated 29 December 1979 (possibly he left to spend some time at Her Majesty's pleasure), having clocked up appearances in 66 issues.

A caption in the 31 December 1977 issue of Cheeky Weekly informed readers that Spiv's name was Alf Price (ho, ho).  In the 14 February 1978 issue, a note scrawled on the wall behind Spiv read "Bring back Dad's Army", acknowledging the inspiration behind the Spiv character.

Spiv was arrested by Constable Chuckle for trading without a licence in the issue dated 20 May 1978, but in the following issue the dodgy dealer was back in the alley trying to sell chocolate bars. 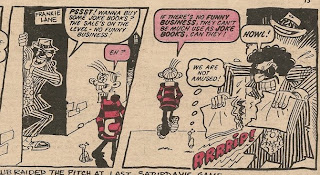 As from the 02 September 1978 comic, Spiv moved out of the alley and into the used car trade.  From this date, Spiv would each week try to persuade Cheeky that a rusting wreck would be the ideal purchase for the toothy funster's dad.  In the issue dated 09 December 1978, Spiv finally sold the car to Posh Claude's dear Daddikins, and very soon thereafter Spiv was back in the alley flogging a variety of items of doubtful provenance. 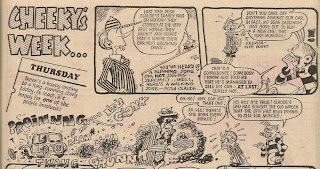 Spiv turned up at Cheeky's new year party in the 13 January 1979 comic, and sold a job lot of 1978 calendars to Uncle Hamish, who was convinced that he'd make a killing "next time 1978 comes round".

The longest gap between appearances by Spiv was the 25 weeks between the 30 June 1979 comic and that dated 22 December 1979.  This absence could be due to another period of detention in some penal institution.  However I suspect the real cause was that the writer ran out of Spiv-type jokes at the end of June 1979, and the reason that Spiv reappeared in the 22 and 29 December 1979 comics (his final Cheeky Weekly appearance) was that these pages had originally been prepared for the December 1978 issues which failed to appear as originally planned, due to industrial action.


The wily wide-boy never joined the elite of Cheeky's pals who featured throughout a particular issue - the issues in which he featured in more than one Cheeky's Week element were those dated 24 December 1977 and 13 January 1979, in which he appeared in 2 elements each.  In the issue dated 24 June 1978 he featured once in Cheeky's Week and also made a guest appearance in the Skateboard Squad strip

Spiv - Number of appearances by Element

Spiv - Number of appearances by Page