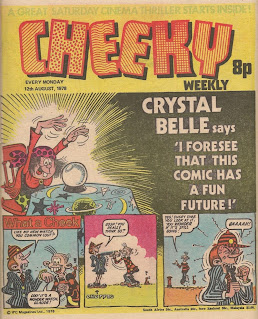 This week's above-title banner (printed in pale green on a yellow background and therefore hardly visible) alerts readers to the new cinema serial which starts inside, and below that, silly seer Crystal Belle predicts fun ahead.  As always, the comical clairvoyant's prophecy is proved right and the larks commence immediately below as Cheeky engages Posh Claude in some horological hilarity in the What a Cheek strip.

There's trouble in Krazy Town park (again) for the Skateboard Squad as they take on a bully who's been pinching the little kids' pocket money.  Deft placement of a skateboard by Skipper propels said lout into the ornamental fish pond, after which the sodden small-change snatcher hands his victims back their cash.

On Sunday evening Cheeky's dad announces that the family is going on a surprise barge holiday, so the toothy clan clamber into their car (Snail presumably slithers aboard) and, with mum at the wheel, set off for the canal.  Cheeky's worried that he'll miss today's episode of 6 Million Dollar Gran, but is delighted to find that his dad has borrowed a portable TV, so our toothy pal can watch his favourite programme while they travel. 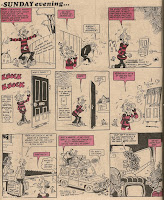 There's some great Ian Knox art in this week's Gran episode.  I particularly like the depiction of the vicious hound descending on the baddie to reclaim his bone.

Throughout Cheeky's Week, the toothy funster is surprised to meet several of his pals who, by coincidence, also happen to be holidaying on or beside the canal.  Even Burpo's parents are there, meaning the toothy funster is not spared his usual Wednesday babysitting session.  To make it worse, Burpo's cousins are also along for the holiday.

On Thursday, Cheeky frets that he won't be able to find the Mystery Comic, but a copy just happens to float by the barge inside a bottle.  Cheeky enjoys a colour Mustapha Million strip (the first time that we have enjoyed a multichromatic Mustapha), as Creepy Sleepy Tale, usually a colour feature in the centre pages, has been shifted forward in the comic and is in black and white.

On Friday, as Cheeky returns from holiday, and just as we're beginning to wonder how this week's Calculator Kid strip will be incorporated into the comic, Cheeky meets Nosy Nora, who has been snooping on Charlie and Calculator's latest doings, and is happy to tell Cheeky what transpired.


On Saturday it becomes apparent why Cheeky had to finish his holiday on Friday, as otherwise he wouldn't have been able to attend the cinema show.  As announced on the cover, a new film serial starts this week - Archie's Angels.  In fact, this is a reprint from Whizzer and Chips, 1972, with art by the ever-reliable Ron Turner.  I'd always assumed that the strip's title was a play on TV series Charlie's Angels, but a quick search reveals the TV show debuted in 1976, so the comic strip title is evidently a play on the word archangel. 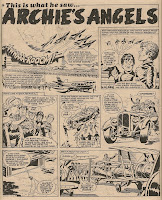 …needless to say the kids, all of whom have had "several" flying lessons, form an aerobatic team dedicated to rescuing those in peril.


There is no 'Cheeky's pal appearing throughout the week' element in this issue, instead the canal barge holiday theme dominates Cheeky's Week.  On page 31 is a teaser for next week's issue, featuring an old geezer wearing a familiar jumper and trainers.

Teacher is the subject of the back cover's Pin-Up Pal poster, and is seen enjoying a daydream in which Cheeky is imperilled in a variety of fiendish ways.

Gloomy Glad's Dad makes his third and final Cheeky Weekly appearance this issue, and Glad's Mum makes her only appearance in the toothy funster's comic this week.

The art team that I refer to as Frank McDiarmid pencils produce the majority of the Cheeky's Week art in this issue, providing 10 elements.  Barrie Appleby delivers the Wednesday conclusion, and there's pure Frank McDiarmid art on the Crystal Belle cover feature, What a Cheek and the Pin-Up Pal poster.