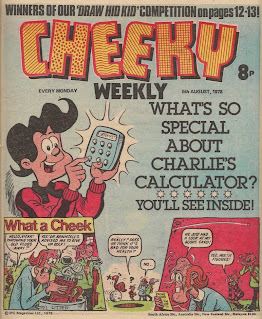 Relative newcomers Charlie Counter (better known as Calculator Kid) and his electronic pal get top billing on the cover this week, drawn by Frank McDiarmid in place of regular CK artist Terry Bave. Meanwhile, the Vicar delivers the punchline in this week's What a Cheek strip.

Teacher, for the second week running the 'featured' pal, and evidently undergoing some kind of breakdown, makes good his threat from last week to "get my revenge on you lot for all you've made me suffer in school - by behaving even worse than the worst of you! Hee! Hee!" On Sunday he appears dressed as a cowboy a la Krazy Town's comical cowpoke Six-Gun Sam. On Monday the podgy pedagogue usurps Cheeky's position as deliverer of the Knock-Knock Door tagline. Teacher appears as a superannuated Burpo on Wednesday, wearing a nappy and bootees. And for the second week running the toothy funster's troubled tutor lays his hands on The Mystery Comic before Cheeky can locate it, riding a unicycle while reading the mysterious publication. Later in the week Teacher tries to sneak into the Saturday morning picture show dressed in a school uniform (he's ejected by Ursula).

Teacher's uncharacteristic episodes come to an end when his wife returns from a week visiting her mother, and finds the scatty schoolmaster hasn't done the housework.  The final panel of Cheeky's Week sees Teacher standing at his front door, dressed in a pinny and scrubbing a saucepan.

Meanwhile, on Sunday evening, Bump-Bump Bernie's explanation of how he sustained his latest injuries becomes so animated that his flailing arms launch him skyward.  Bernie is still aloft on Monday when, unnoticed by the folks of Krazy Town, he collides with permanently airborne Bubblegum Boy.

Pages 12 and 13 are given over to the winners of the Draw Hid Kid competition which appeared in the issue dated 27 May 1978.

In this week's Mustapha Million strip, the middle-eastern moneybags invites a pal to play tennis.  Said unnamed chum has been told to look after his little brother Alfie, but Mustapha says that Alfie can come along, too.  Of course, Alfie proves to be a handful.  Among the guards posted to keep an eye on Alfie in the final panel, Reg Parlett includes Kojak and Stavros from the popular TV show of the time, Kojak.

Other special guests in this issue are then-Chancellor of the Exchequer, Denis Healey and Conservative leader Margaret Thatcher on Tuesday, and TV comedy trio The Goodies, who Cheeky meets in Granny Gumdrop's shop on Friday. 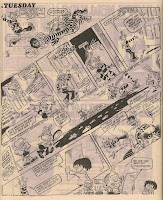 James Bold reaches the final episode of his final adventure this issue.  His escapades, while all rather disappointing as he encountered no supernatural occurrences (though he did discover a spaceship-load of harmless aliens), proved a good counterpoint to the humour strips, and none of the fillers which will take his place in future issues will prove as memorable.  He'll be missed (but JB will return in the Cheeky annuals dated 1979, 1980, 1981 and 1982).

The back-cover Pin-Up Pal poster this week features feisty feminist Libby, about to fetch Cheeky a clump with her placard.