Chronic dandruff sufferer and Cheeky's nemesis, Teacher (whose surname was Smith, as we learned in the In the 22 January 1977 issue of Krazy) made his first Cheeky Weekly appearance in issue 5, dated 19 November 1977, and featured in 109 issues of the comic.

Teacher's second Cheeky Weekly appearance was on the cover of the 26 November 1977 issue, where he acted as straight man for Cheeky's What a Cheek gag.  Teacher appeared in a further 4 What a Cheek cover strips, in which he variously appeared with white, ginger and red hair, and in his final What a Cheek, memorably changed from having white hair to red hair within a single strip. 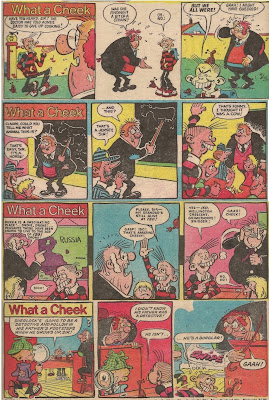 Not only was Teacher another victim of the Cheeky Weekly inconsistent hair colour plague, but his scalp condition was not constant throughout the comic's run.  In his first Cheeky Weekly appearance he was dandruff-free, despite his flakes being present in Krazy from his second appearance in that title in the issue dated 23 October 1976.

Cheeky and Teacher were locked in a titanic struggle for classroom supremacy.  Cheeky usually arrived late for class with an outlandish excuse for not completing his homework, and often received lines as a punishment for his lack of application. 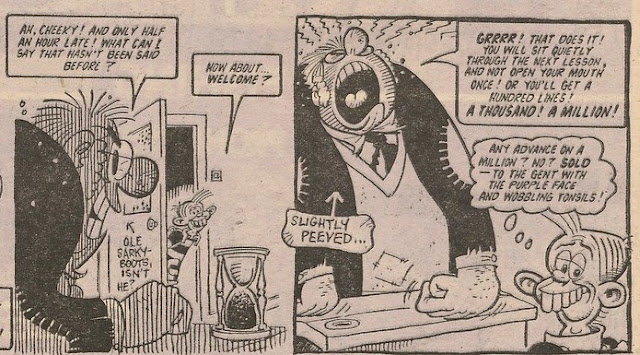 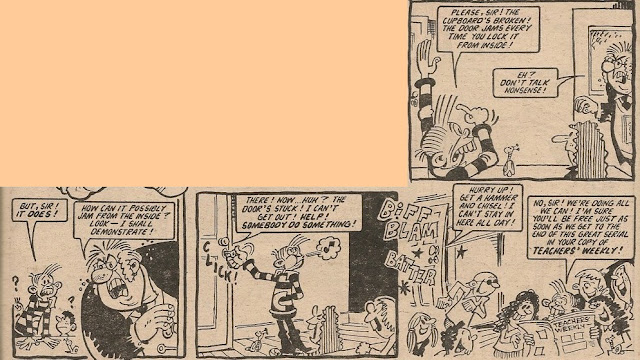 In the final Cheeky's Week panel of the 29 July 1978 issue, Teacher told Cheeky "I'm going to get my revenge on you lot for all you've made me suffer in school - by behaving even worse than the worst of you!  Hee-hee!".  In retrospect, this outburst seems to herald some form of breakdown, as in the comic dated 05 August 1978 Teacher appeared throughout the week, taking on the characteristics of Cheeky and some of his pals.  First he dressed as Six-Gun Sam, then usurped Cheeky's place for a joke with the Knock-Knock Door.  He also appeared in a nappy as Baby Burpo, and obtained the Mystery Comic before Cheeky had located it (and read it while riding a unicycle), then turned up for the cinema show disguised as a schoolboy.  However in the final Cheeky's Week panel of this comic Teacher's rampage came to an end as he appeared at his front door, dressed in a pinny with saucepan and washing up brush in hand, to tell Cheeky "My dear wife has just come back from visiting her mother and discovered that I haven't done any [housework] since she left.  I'm not allowed out!". 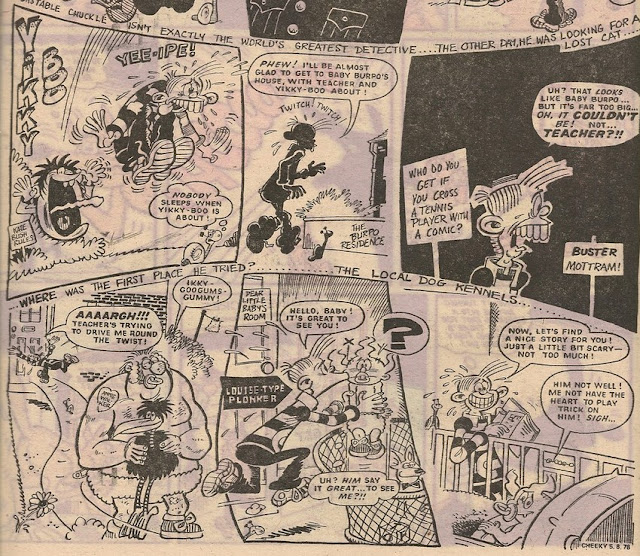 Teacher was featured on the Pin-up Pal page in the 12 August 1978 issue, and was the subject of 05 May 1979's Burpo Special, which was another flake-free appearance.  He also appeared as a supporting character in 16 June 1979's Burpo Special, in which the subject was Burpo himself.  Teacher presented the Laugh and Learn feature which appeared in 5 issues between 07 October 1978 and 09 December 1978.  The podgy pedagogue briefly had his own puzzle page, Teacher's Teasers, which appeared in the 26 August 1978, 02 September 1978 and 23 September 1978 issues. 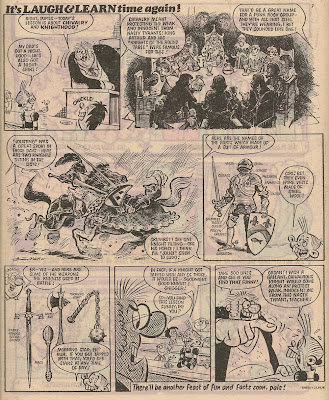 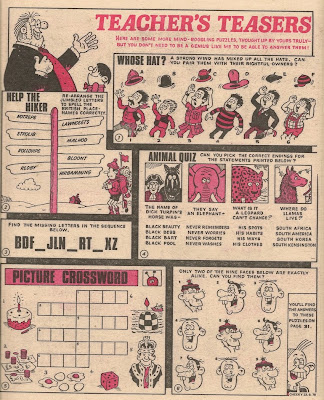 Teacher - Number of appearances by Element


Teacher - Number of appearances by Page