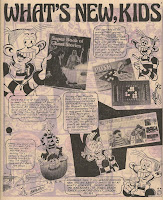 Personally, I would have been happier with a question mark at the end of this feature's title, but sadly we were never to get one in any of the 58 issues in which it appeared.

An advertising feature and therefore source of revenue for IPC, What's New, Kids appeared in the first issue of Cheeky Weekly and thereafter sporadically until its final run out in the comic dated 17 November 1979.  On the first appearance, Cheeky announced "All the latest info, boys and girls!  Read all about it here!".

The first item to be promoted was that grand old pursuit of the prepubescent British male baby boomer, the Airfix kit (in this case the Tornado jet fighter).  I would imagine that by the late 70s, the lure of 'locate and cement sprocket A into flange Z' was waning dramatically  In that first page, readers were also invited to write in and let Cheeky know of anything 'new and exciting'.  These reader recommendations were featured in a 'news' panel on the What's New, Kids page, which appeared occasionally from 04 February 1978, until bowing out on 03 June 1978. 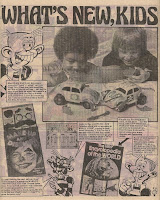 It wasn't just toys that were featured, new films were quite often given a plug.  James Bond's 1977 film outing, The Spy Who Loved Me, was featured in the second issue, in a double whammy film-and-Corgi-Lotus-Esprit tie-in.  The first instalment of the Star Wars saga was plugged in the issue dated 10 December 1977, with the related action figures being featured in the 08 April 1978 comic.

A surprising (from our current perspective) number of books were featured on What's New, Kids.  Gyles Brandreth seems to have had some arrangement with the comic, as his books were plugged on 3 occassions.

Judging by these pages, kids' bedrooms of the time were filled with toys, books and board games, and the explosion in home entertainment, which was to erode comic readership across subsequent decades, is hardly evident.

Occasionally, a character from Cheeky's Week who was in some way related to the product being advertised would be pressed into service on the What's New, Kids page.  For example, Lily Pop (the cracking crossing lady) introduced The Ladybird book of Road Sense. 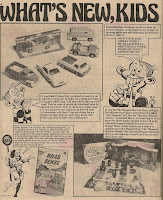 On 16 June 1979 the What's New, Kids page was revamped, with a different typeface for the title, and no further appearances by Cheeky or his pals.

Ever eager to promote the other titles in its range of comics, IPC would quite often insert in-house ads when there was a suitable space on the What's New, Kids page. 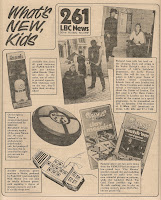 Rather ironically, the final appearance of the feature, in the comic dated 17 November 1979, presaged the upheaval to come, as it introduced two products based on the insidious silicon chip, Simon and Merlin.  Who could have guessed that these two primitive games would open the floodgates of the home electronics revolution which would sweep comics (and Airfix kits) from their comfortable position as a mainstay of kids' entertainment and leave them struggling for survival?

The Cheeky artwork on this feature was a variety of cut-and-paste assemblages, some of which were rather alarming, such as the 'left hand on right arm' example which was seen on more than one occasion. An example of this unsettling image can be seen in the scan at the top of this post. The incongruently-appendaged illustration of the toothy funster originally appeared on the back cover of Cheeky Weekly's first issue.

48 of the features covered a single page, with 10 appearances being a half-page or less.