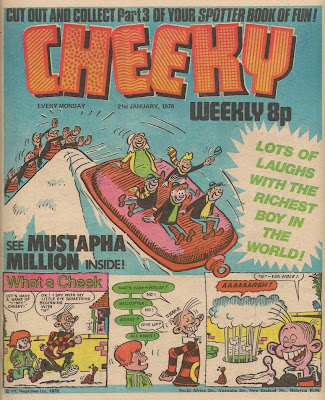 Mustapha Million is the featured character on this week's cover, in a blown-up panel from the Mustapha tale inside.  The What a Cheek strip features an unfortunate stooge who's destined for a plummet down a manhole.  I presume Bump-Bump Bernie was unavailable due to injury.  Somebody really should have a word with Manhole Man about leaving his aperture uncovered. 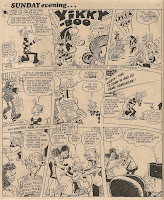 There may be further evidence of the Cheeky Weekly inconsistent hair colour epidemic as on Sunday evening Cheeky's Mum, who last week had light-coloured hair, is now sporting dark tresses.  However, in fairness, we must acknowledge that maybe she has had her hair dyed in the period since her previous Sunday evening appearance.


On Monday Cheeky meets Mechanic, who for the first time is not under a car. Normally all we see of Mechanic is his feet, but on this occasion only his face remains hidden.

The Old Comic feature this week reprints a page from Tip Top comic, 1953, containing The Happy Family strip plus Merry Moments at Sunnyside School.  Unfortunately the reduction in size necessary to fit the page into Cheeky Weekly renders the contents of the speech balloons practically illegible.  Maybe Tip Top was a broadsheet-sized comic, in which case perhaps it wasn't the best choice to reprint in a tabloid publication.

Pages 22 and 23 feature the Mustapha Million strip, where the mighty Reg Parlett turns in some nice work on a winter-themed tale. 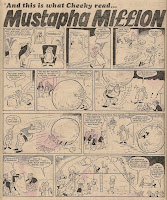 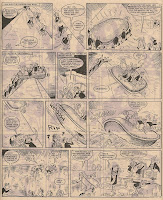 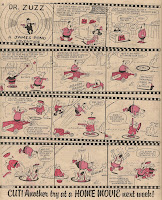 More manhole-related fun is evident in this week's Home Movie, Dr Zuzz.  There was an opportunity to integrate the strip into Cheeky's world by drawing Manhole Man as the irate subterranean worker, but maybe the editor felt that depicting Manhole Man angrily chasing Hooter Harrison and pals in the final frame would upset the readers.


In the cinema interval, as Cheeky settles down to watch Space Family Robinson, he speaks the lines about Mrs Robinson going missing that were mistakenly included in last week's issue. 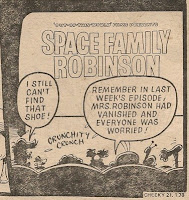 A half page in-house ad on page 30 announces a competition next week, also running in stablemates Whoopee!, Whizzer and Chips and Krazy.  There's an air of desperation in the underlining of extra comic. 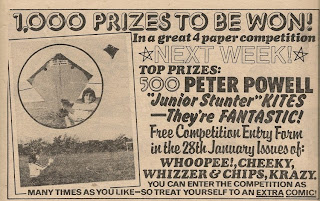 This issue of Cheeky Weekly is turning into something of a manhole special, as there's another missing cover in this week's instalment of the Spotter Book, which closes the issue, art by Jim Petrie. 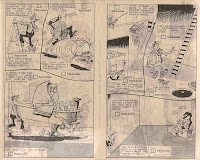 On Sunday evening Cheeky says he will be introducing some new pals this week, and these new arrivals are Yikky-Boo, Petula, Gunga Jim and Six-Gun Sam.  Skipper from the Skateboard Squad also makes his first appearance in Cheeky's Week as the Squad speed past Cheeky on the way to their latest adventure.

A new feature this week is Tweety and Sylvester (zzzzzz….)