Cheeky's mum had not appeared in Krazy when she made her debut in Cheeky Weekly issue 2, dated 29 October 1977. To say that she 'appeared' in that issue may be a bit of an overstatement, as no more than her right arm was seen that week. Readers had to wait another 2 issues to gaze upon the face of Cheeky's mater. On that occasion Cheeky accompanied her to the hairdressing salon, as he knew that The Mystery Comic was to be found there.

Initially, Cheeky's mum's main role was to appear on Sunday evening to tell our toothy hero that he must get to bed as it's school tomorrow, and no, he can't stay up to watch 6 Million Dollar Gran. Cheeky, of course, was always able to employ an artful ruse in order to secure a seat in front of his favourite TV show.


In the 18 March 1978 issue, Mum is seen on the Suddenly page, in the car and glaring at Dad, who is one of the drivers jamming on his brakes to get a good look at lovely Lily Pop as she escorts Cheeky across the road and into school.

In the 12 August 1978 issue, we see Mum in her usual Sunday evening spot, but also on Friday as she drives dad and Cheeky home from their boating holiday.

With the introduction of the entire Mystery Comic to the centre pages of Cheeky Weekly as from the 30 September 1978 issue, the Sunday evening feature was dropped to make room for the new content.  Mum's next few appearances would be on the Sunday page, but the 'Cheeky using sneaky deception to watch 6 Million Dollar Gran' sequence was dropped since, as Cheeky explained, the show had been moved to a mid-day slot.  Instead we saw Mum briefly as the toothy funster rushed in to switch on the TV. 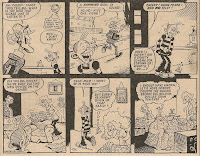 Cheeky's Saturday morning visit to the cinema was featured in the comic for the last time in the 02 December 1978 issue, and in subsequent issues we got to see, in a 2-page feature, what happened to our hero on Saturday afternoons. In the first of the Saturday afternoon strips on 09 December 1978, the final panel of the 2nd page showed Cheeky heading home to enjoy his mum's fish and chips which were, according to our toothy hero, 'The best in town'.

This fish-and-chip-themed final panel became a permanent fixture (with 2 exceptions) of Cheeky's Saturdays from 10 March 1979 to 30 June 1979 (although it wasn't always his mum's chips he ended up scoffing - in the 19 May 1979 issue Cheeky went to the chip shop and was delighted to find luscious Lily Pop was serving).

Chips were back on the menu for a last time in the 08 September 1979 issue.  How did we get on to the subject of chips, anyway?

Cheeky's mum featured 7 times in the Snail of the Century strip, usually as Snail returned home after his tour round the garden, and it was in this feature that Mum made her final Cheeky Weekly appearance, in the comic dated 12 January 1980, having appeared in a total of 59 issues.

Ma Cheeky's hair colour changed a number of times over the weeks.  On most occasions we can put that down to visits to the hairdresser, but on the back cover of the 31 December 1977 issue we see the Cheeky family eagerly awaiting the arrival of the first guest at their new year party.  The following issue dated 07 January 1978 commences where the previous issue left off, but in the few seconds of 'comic time' that elapsed between the issues, Cheeky's mum's barnet has changed from black to blonde.  I'm afraid we have no option but to ascribe this event to another case of CWIHCS (Cheeky Weekly Inconsistent Hair Colour Syndrome), particularly since a caption on the 31 December 1977 page suggests that Mum had just been to the hairdresser's.

Cheeky's mum made it onto the cover 5 times, once in the main illustration on the cover of the 01 April 1978 issue, 3 times in What a Cheek strips, and once in that strip's replacement, Cheeky's Week.