Although not a full-blown revamp, there was a certain amount of upheaval in Cheeky Weekly's 01 July 1978 issue.  The 2-page-a-week Space Family Robinson series had come to an end in the previous issue, as had the Suddenly element of Cheeky's Week.  The Tuesday feature was absent from the 01 July 1978 issue (although it would return the following week), and there was less advertising than there had been the week before.


Moving into some of the pages thus vacated was a Whizzer and Chips mini comic, one of IPC's sporadic mini comic promotions which would see Buster, Whoopee! and Mickey Mouse mini comics appearing in Cheeky Weekly in the ensuing weeks.  Making its debut in the same issue was the Calculator Kid feature.

In the second part of his series 'A Line In Chuckles', which was published in the summer 1986 issue of British comic fanzine Golden Fun (see also Terry's more recent autobiography), Calculator Kid artist Terry Bave says his new Cheeky Weekly strip was originally to be about a boy and his transistor radio.  After further consideration, this idea was changed to feature a boy and his CB radio.  Bob Paynter, publisher Fleetway's Group Editor, looked at both ideas and suggested that a calculator might be more topical.  It's hard to believe now, but in a late 70s world where mobile phones were still considered by most to be in the realms of science fiction, a piece of handheld technology such as a calculator was pretty exciting stuff.  Especially when you discovered you could get it to spell out the word BOOBIES.

Young Charlie Counter was given a calculator as a birthday present in the first Calculator Kid strip.  Charlie, the Calculator Kid of the strip's title, was delighted with his gift, and even more so when he realised it not only had the power of speech, but his new plastic pal was electronically prescient, able to calculate the best course of action in any situation and confidently telling Charlie, in a slightly scary way, "I am never wrong". 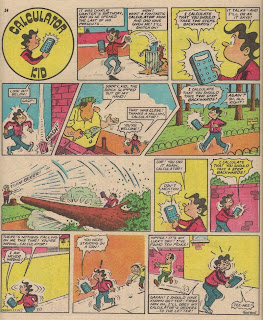 The 16 September 1978 story is typical of the series; Calculator advises Charlie to take a hot water bottle out with him, despite it being a sweltering day.  Charlie is subject to the ridicule of passing kids as he walks the sunny streets clutching his heated rubber bottle.  After being rewarded with a free cornet for warming the ice cream seller's frozen digits with his hotty, Charlie is advised by Calculator not to dispose of the now-cold water, which comes in handy when Charlie encounters a motorist whose radiator has run dry.  Grateful motorist, radiator now brimming, further rewards Charlie, in cash this time.  Calculator now advises Charlie to use the free air compressor in a filling station to inflate the hot water bottle in order that nearby fractious baby can bounce on it.  Cue further cash from happy baby's happy mum.  The strip ends with Calculator's rather smug catchphrase, "As calculated!"

Charlie crossed over into Cheeky's Week, appearing with the toothy funster on the page preceding the Calculator Kid feature in 38 issues, much in the way the Skateboard Squad's strips were often introduced by their appearance with Cheeky before their story commenced.  Crossovers with Cheeky's Week also happened in the other direction, as Snail and Baby Burpo appeared in the 15 July 1978 Calculator Kid story, and Snail went on to appear again in the 05 August 1978 and 09 December 1978 stories. Charlie and Calc were among the guests at Pete and Pauline Potts' party in the 6 Million Dollar Gran strip in Cheeky Weekly dated 06 October 1979.

A school-based Calculator Kid episode in the comic dated 03 February 1979 suggests that Charlie attends the same school as Cheeky when, in a scene set in the boys' washroom, writing on the wall reads 'Cheeky was here'. 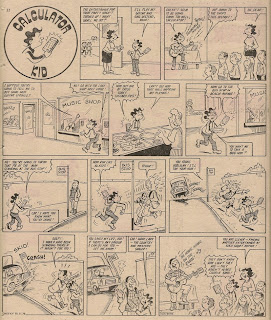 All 78 Calculator Kid strips were single-pagers (occasionally less than a full page) drawn by Terry Bave.  Charlie and Calculator were the subject of the Pin-Up Pal poster in the 16 September 1978 issue, but that was drawn by Frank McDiarmid.  The first and last Cheeky Weekly Calculator Kid strips were in colour, as were 8 others.  The strip was absent from only 3 issues during its run from 01 July 1978 to 02 February 1980.

Calculator Kid's title panel, showing Charlie gazing lovingly at his number-crunching mate, remained essentially unchanged throughout its run, although the colouring of the background circle varied when the strip was printed in colour, and in the strip printed in the 29 December 1979 issue, the title was embellished with snow and holly.

Calculator Kid made its debut on page 24, and it hovered around that position until 09 December 1978, when it jumped to page 4.  It then slipped back slightly, and most frequently occupied page 7 until 07 July 1979 when it moved up to page 3, where it remained, with 4 exceptions, until the penultimate issue, dated 26 January 1980.  In the final issue of Cheeky Weekly, Calculator Kid was on page 16.

Calculator Kid was one of the features that survived the merge, and his adventures continued in Whoopee! and Cheeky.  At least one Cheeky Weekly strip was reprinted as Carlito Y Su Calculadora in Spanish publication Zipi y Zape in 1984.  The sample page from Zipi y Zape shown here was originally printed in Cheeky Weekly dated 04 November 1978, in black and white.  Calculator Kid reprints also appeared in The Best of Whoopee!

A profile of Charlie Counter and Calculator can be seen here.