The Calculator Kid strip in the final issue of Cheeky Weekly was printed in colour, and the debut of Charlie and his battery-powered buddy within the Cheeky Section of the first combined issue of Whoopee! and Cheeky was a similarly multi-hued affair. In fact the majority of Calculator Kid’s Whoopee! strips were printed in colour until the issue dated 13 February 1982. This was because the feature usually appeared on page 24, one of the internal colour pages, during the period in question. Initially page 24 was the location of the Cheeky Section's 'back cover', but Calculator Kid remained in that location (barring a few exceptions) after the comic-within-a-comic idea was abandoned. Following the 21 February 1981 edition, CK relocated to page 32, the actual back cover, another location where colour was available.

In the pages of Cheeky Weekly, the strip had a title panel at the beginning of the first row of pictures, but as of its move into Whoopee!, a title banner was introduced, spanning the width of the page, although the introductory image of Charlie gazing lovingly at his digital companion was initially carried over from the previous title panel.

For the benefit of long-term Whoopee! Readers who may have been unfamiliar with the feature’s premise (and there was no reason why they should, because Charlie and his mathematical mate did not feature in the Cheeky Weekly mini comic that appeared in Whoopee dated 08 July 1978 - they had made their debut in Cheeky's comic only a week earlier - and during the 1979 Star Guest promotion Calculator Kid for some reason appeared twice in Whizzer and Chips but never in Whoopee!), in the first episode of his post-merge run Charlie delivered some expository dialogue in response to an encounter with a newcomer to ‘our area’ (i.e. Krazy Town, but Charlie doesn't mention that as it would be confusing for Whoopee! readers). 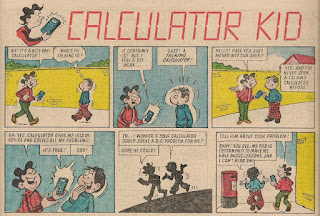 Following their relocation to Whoopee!, the format of the stories continued in the same vein as those in Cheeky Weekly, with Calc’s infallible advice often seeming inappropriate at the outset but resulting in a (usually) positive outcome for Charlie, the happy ending often concluding with Calc’s ‘as calculated’ catchphrase or a variation thereof based on a pun relating to the story (such as 05 June 1982’s script concerning Charlie’s mum’s unsuccessful cake baking, which ended with the family seated at a slap-up restaurant feed, in which Calc’s closing comment was ‘I cooked up a nice calculation there!’).

As of the 06 September 1980 episode, the title banner underwent a revamp and the accompanying picture of Charie and Calc was removed, allowing the strip’s title to be slightly enlarged, although it was still in the style of an LED display. The original Whoopee!-era banner with Charlie and Calc was reintroduced in the 27 February 1982 edition, but its replacement returned (although now the banner had a black background to emulate more closely a calculator display) in the comic dated 01 May 1982.

There was an embarrassing admission on the letters page in the comic dated 30 May 1981... 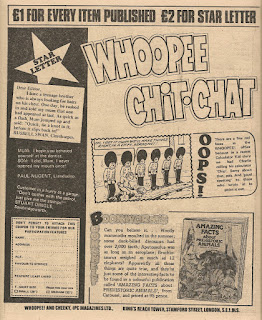 ...The offending strip, containing an erroneous reference to the egregious C**p, had appeared in the issue dated 21 March 1981... 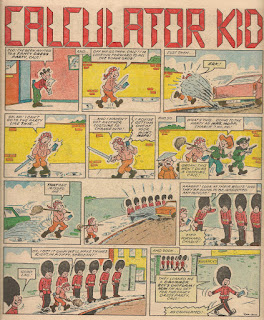 But when it was reprinted on the back cover of The Best of Whoopee, November 1986, the error was corrected... 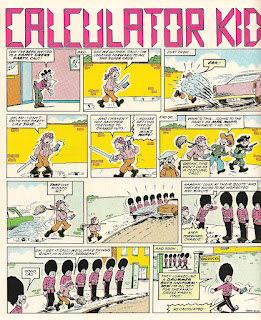 Spin-off strip Calculator Corner commenced in Whoopee! dated 27 November 1982. Created by the ever-inventive Jack Oliver, this feature set readers various posers which required use of a calculator to solve. Often the answer would require some calculation to be performed before the mathematical instrument would be inverted, resulting in the upside-down numerals being read as text. Calculator Corner became a regular feature of the comic, sometimes sharing a page with a truncated Calculator Kid strip, but more often appearing independently of its progenitor. Calculator Corner made the final appearance of its Whoopee run a week before the comic's ultimate issue, the feature's 95 issue run a testament to the fertile mind of Mr Oliver.

The title Calculator Corner was never more apt than when the feature was reduced to the bottom left hand area of page 31 in the 23 July 1983 edition (a section even smaller than that allocated to each of the week’s stamp collecting ads!), when the clever keypad combo was submitted by Robin Cox, the only time the content was sourced from a reader. However, the title that week read Calaulator Corner... 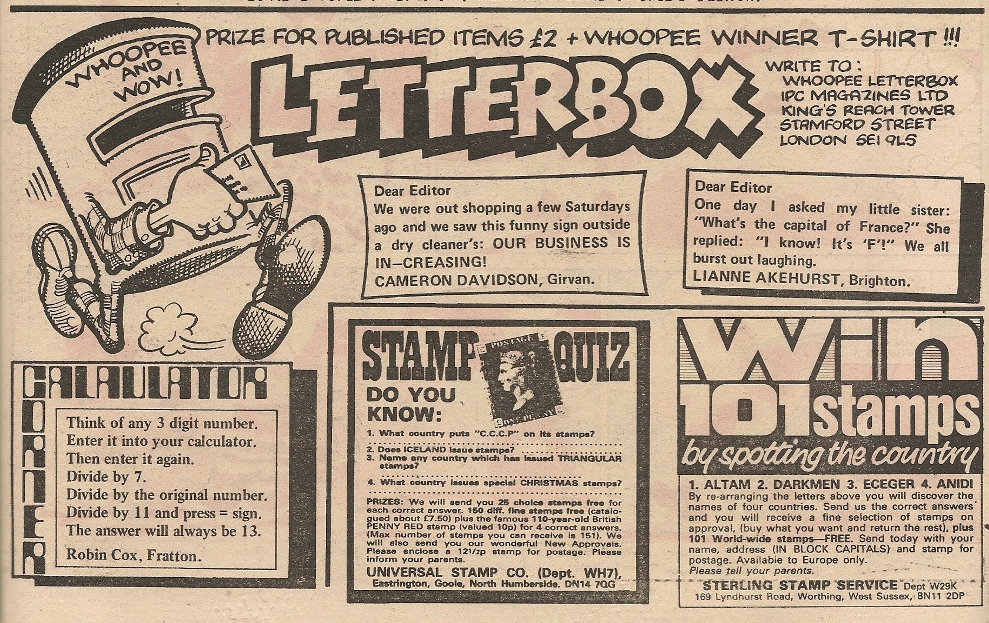 Charlie and Calc were often host to Whoopee co-stars during Calculator Corner's run, and the 12 November 1983 issue saw an encounter with Mike from Calculator Kid’s inferior imitator, C**p (fortunately the tedious rival microchip itself was not involved).


It appears that the Whoopee editor was on something of a mission to tax the brains of readers, as a new puzzle feature was introduced in the issue dated 04 December 1982. Quizmaster, created by Roy Mitchell, was a half page collection of posers, introduced each week by a different character from the comic's roster of stars. Charlie and Calc were given the honour of hosting the inaugural outing.


In honour of the absorption of Wow! into Whoopee, Calculator Kid's title banner was given another overhaul in the first issue to combine the two titles, dated 02 July 1983 – the LED-aping text was slightly redesigned, and the two words were separated by an image of the titular silicon-chipped sage which was based on the smiling calculator pic that accompanied most Corners. The same issue saw the adoption of another kid-with-tech strip, KBR (Kids Band Radio), which had transferred in from Wow! The main character in this feature was a youngster with a citizens band (CB) radio. In the UK interest in CB had been building since the 1970s, but its use was legalised in 1981. The excitement surrounding the official launch of the technology prompted the creation of the KBR strip much in the same way that the interest in calculators resulted in the creation of Calculator Kid. However this gadget-based arriviste proved short-lived, and KBR signed off after just 19 Whoopee and Wow! appearances.


In the 12 November 1983 Calculator Kid story, following the instructions issued by his battery-powered buddy, Charlie inserts Calc into the cartridge slot of his video game console. The microchip-powered mathematical maestro then generates images of Charlie and Calc on the family TV set, attracting an audience of Charlie’s pals. At the end of the video sequence the game soundtrack announces ‘If you want more, we’re in Whoopee every week’, demonstrating that Calc is aware that they are characters in a comic.

The scripts were inconsistent in relation to the Counter household’s televisual habits. The 26 December 1981 story starts with a family disagreement over what they will watch on Christmas Day - Charlie favours the ‘spy film’, while Dad wants to see ‘the western’ and Mum’s looking forward to a musical - ITV’s James Bond film on December 25th that year was Dr No, a somewhat elderly choice from the 007 canon by that stage but it was a case of sacrificial scheduling since whatever ITV had shown in that time slot would have lost out in the ratings war to BBC's highly popular Larry Grayson’s Generation Game, followed by In Search of the Castaways on the main channel. BBC2 at the same time showed A Charlie Brown Christmas/Uproar in Heaven (Chinese animation), so the viewing dilemma outlined in the CK script didn’t entirely match reality. Following some judicious calculating, Mum, Dad and Charlie each get their own TV set on which to enjoy their programmes of choice. However the 08 May 1982 strip commences with Charlie fretting that he will miss the ‘spy thriller’ on TV that evening because it coincides with Mum and Dad’s favourite programme on another channel. Crafty Calc engineers diversions so that Charlie’s parents are occupied with other matters at transmission time, leaving young Master Counter to enjoy his espionage entertainment. What happened to the two spare TVs obtained mere months earlier? Did the family have to sell them to raise some cash?

The strip continued to appear in Whoopee up to and including the final issue dated 30 March 1985. Calculator Kid enjoyed a 259-episode Whoopee run, far exceeding its 78 appearances in Cheeky Weekly, and never lapsing into reprints. All the Calculator Kid Whoopee stories were by Terry Bave, whose appealing artwork and good-natured, reassuring scripts made it a highlight of the comic.

Following its cancellation Whoopee was merged into Whizzer and Chips, and Charlie and Calc were among the Whoopee survivors who transferred into IPC's mighty 'two comics in one', both in their own strip and Calculator Corner.
Posted by Niblet at 09:57