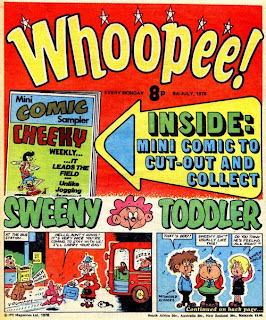 The second week of IPC's summer 1978 mini comic promotion saw a miniature replica of Cheeky Weekly appearing in Whoopee! dated 08 July.  Many thanks to klakadak-ploobadoof from the Comics UK forum for providing the scans. 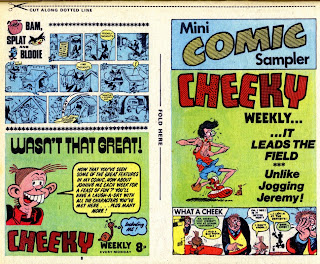 The combined back/front cover features a Bam, Splat and Blooie reprint from Buster, rather an odd choice to include in what one would expect to be a showcase of the best that Cheeky Weekly had to offer.  The BS&B filler strip appeared in only 9 of the 38 issues of Cheeky Weekly published by the time of this mini comic, and had appeared for the final time on 17 June 1978.  Alongside BS&B, on the mini comic cover, is a pic of Jogging Jeremy taken from the Pin-Up Pal poster in Cheeky Weekly's 25 February 1978 issue.  Beneath is a teeny-tiny What a Cheek that I think is by Frank McDiarmid, but the strip is printed so small it's hard to be certain. 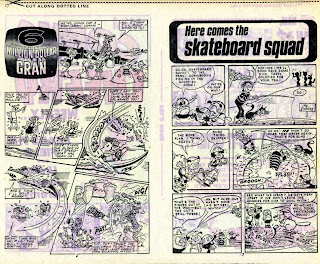 Next up is a 6 Million Dollar Gran page by Nigel Edwards who, by the time of this mini comic, had stood in twice on the Gran strip for original artist Ian Knox over at Cheeky Weekly.  No attempt is made to explain to readers unfamiliar with Gran's back-story how or why she is able to perform such amazing feats.  Beside Gran is a Skateboard Squad strip by Jimmy Hansen. 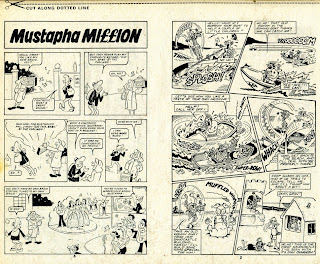 This is followed by a Joe McCaffrey Mustapha Million page.  Over at Cheeky Weekly this very week, Joe was deputising for original Mustapha artist Reg Parlett for the second time.  Joe would eventually take over from Reg on Mustapha permanently (with one exception) in Cheeky Weekly from February 1979.  On the adjacent mini comic page is the conclusion of Gran's story. 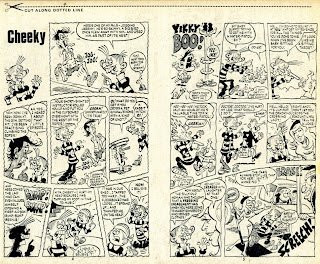 Cheeky and a select few of his pals get the centre pages of the mini comic to themselves, drawn by Dick Millington.  Dick had provided Cheeky's Week pages in 3 issues of Cheeky Weekly by this time, as well as drawing the Sweet Tooth page in the Whizzer and Chips mini comic that had appeared in the previous week's issue of the toothy funster's comic.
Posted by Niblet at 14:52