IPC, publisher of Cheeky Weekly, was understandably keen to increase circulation of all its titles, and had a number of strategies to boost readership.

TV advertising was expensive, and was therefore reserved for publicising comic launches.  The brief ads, occupying the teatime TV slot and aimed at the just-home-from-school brigade, were intended to lure potential readers who were unaware of IPC's comic offerings into becoming regular purchasers of their latest comic title.  New comics were also publicised in IPC's existing titles, often in the form of advertising supplements (or 'flyers') in the centre of their comics.

Having ensnared the nascent comic fan into the habit of buying a title regularly, IPC hoped to entice them to expand their reading by including in their titles ads for other comics from the IPC line.  Humour and humour/adventure comics, which were generally aimed at the lower age range of the comic-reading audience, carried ads for comics of a similar type, with the implication that 'if you like the comic you're reading, you can enjoy twice the fun by also buying comic X'.  However, the comics aimed at a younger audience also periodically carried ads for titles whose target audience consisted of the upper age ranges of the comic-reading demographic.  These older-reader-title ads were aimed at those who were starting to feel that they were getting a little too old for the younger end of the comic spectrum, but who IPC were desperate to retain as loyal readers for as long as possible.

IPC also employed tasters to tempt youngsters to explore their other output.  One such was the 'Star Guest' feature which ran from time to time in their younger-audience titles, featuring strips from other comics, giving a flavour of what might be found in adjacent comics on the newsagent's shelf.

This series of posts will look at another taster feature, the Mini Comic. 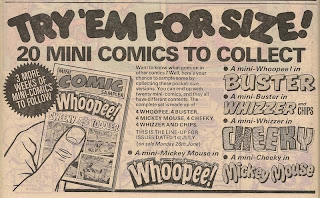 IPC periodically ran a series of mini comics across their younger-reader titles.  One mini comic campaign occurred during July 1978 and as well as the toothy funster's own comic, the promotion encompassed Buster, Whoopee!, Whizzer and Chips and Mickey Mouse.  Under the banner, 'Try 'em for size!', this promotion was announced in Cheeky Weekly dated 24 June 1978 (and in other IPC titles published the same week).

As the name implies, the mini comic was a condensed version of a particular title featuring, presumably, the most popular strips from the comic being promoted.  The pages would be printed sideways to allow 2 pages-worth of strip to fit on a single page of the host comic.  Readers would be invited to cut out the mini comic pages, then fold and compile them into a small-sized replica of the comic being featured.  The intrusion of a mini comic into one's regular title of course meant that some of the usual content would be temporarily absent.  IPC evidently felt that the annoyance caused to their readers would be offset by a gain in circulation that made it worthwhile.

The reduced page size would mean that most of the artwork was specially prepared for the mini comic, since printing artwork intended for a normal sized comic at such a reduced scale would render it at best hard to read.  Strips featured in the mini comics would often be drawn by artists other than those who drew the strip regularly in the 'guest' comic, presumably because the usual artist had a heavy workload.

Let's have a look at the first mini comic to feature in Cheeky Weekly, namely the Whizzer and Chips mini comic from the 01 July 1978 issue. 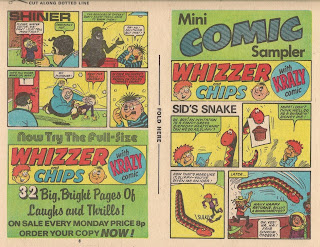 On the combined front/back cover are Shiner and Sid's Snake, both drawn by Mike Lacey, who was the regular artist on these strips in Whizzer and Chips. 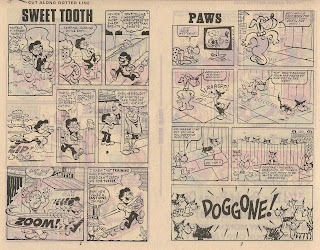 Page 2 contains the adventures of confectionary-guzzling Sweet Tooth, drawn by Dick Millington for the mini comic, but usually rendered by Trevor Metcalfe.  Sweet Tooth is coupled with a Paws strip by Artie Jackson, standing in for usual artist Styx (Leslie Harding).  Sweet Tooth would return to Cheeky weekly in the issue dated 21 April 1979, where he was the subject of the Star Guest feature (another circulation-boosting ploy), and Paws was the Star Guest in the 23 June 1979 issue. 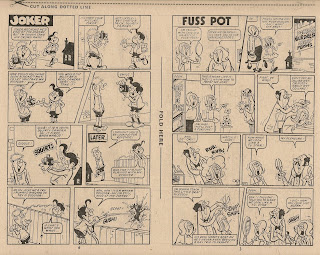 Joker and Fuss Pot are both drawn by Tom Williams, but their usual artists were Sid Burgon and Norman Mansbridge respectively.  Fuss Pot would later feature in the second Star Guest strip to appear in Cheeky Weekly, in the comic dated 07 April 1979, and Joker would be the Star Guest in the 07 July 1979 comic. 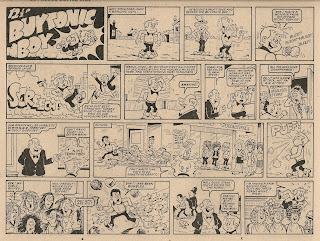 12 1/2p Buytonic Boy (the only strip in the mini comic to feature a character who had moved into Whizzer and Chips from the recently-defunct Krazy) is drawn by Ed McHenry, in place of usual artist Robert Nixon.  The Buytonic Boy made another appearance, as the Star Guest, in Cheeky Weekly dated 05 May 1979.

Further Mini Comics from this promotion can be seen here.
Posted by Niblet at 23:38