Hid Kid's right hand appears in this week's main cover pic, and Cheeky indulges in insomnia fun in the What a Cheek strip.

After last week's canine-themed Skateboard Squad story, there's more animal antics this issue as the terrific trio are tasked with looking after a St Bernard.

On Sunday evening Cheeky watches the synthetic senior citizen roll up lengths of railway track in order to halt a runaway train in this week's 6 Million Dollar Gran episode.

Crunching Chris gets the guest-star treatment this issue, as on Monday he tells Cheeky he's going to see if he can make his everlasting toffee-bar last until Saturday.  Needless to say, the noisy nosher crunches his way through the week.

The vintage strip selected for this week's Old Comic page is a Sporty reprint from Knockout.  I remember Reg Wootton's Sporting Sam strip from the Sunday Express.

Frank McDiarmid's depiction of Hid Kid-ensconced-within-a-post-box from this week's cover appears again on page 14 (although reversed and with the EIIR removed), where readers are invited to send in their drawings of Hid Kid.  All pictures published will win a £2.00 prize.

For some time now I've been toying with a theory that the Creepy Sleepy Tale artist who took over from Mike Brown was Keith Reynolds, ghosting a Baxendale-ish style.  The 'Crumph!' panel in this week's tale looks typical of Keith's work to me. UPDATE 23 October 2018 - I have now assigned this and 33 other Creepy Sleepy Tale episodes to Keith - my thanks to Stephen Archer for his helpful comment below. 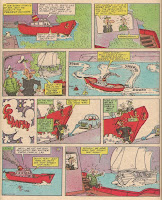 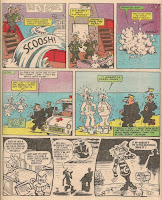 This week's Home Movie is Dick Twerpin.  This is of course a film directed by Cheeky's pal Oscar, and not the same character who appeared in Monster Fun's Badtime Bedtime Book, nor the subject of the feature which appeared in the Cheeky Annuals from 1980 to 1984.

Space Family Robinson feature in the third of their episodes to share the title 'Escape'.

Posh Claude is just about to plummet down the Manhole Man's manhole (someone really should have a word with him about leaving his aperture uncovered) in this week's back cover poster.

Dick Millington, returning to Cheeky Weekly for the first time since his work appeared in the 24 December 1977 issue, handles the majority of the Cheeky's Week features this week, contributing 11 elements.  Frank McDiarmid gives us the main cover pic and What a Cheek, plus the back cover poster, while Barrie Appleby provides the Wednesday conclusion.