Cheeky's soccer-playing feline chum first appeared in the debut issue of Cheeky weekly, and made tin-can-football-saving appearances in a total of 71 issues, bowing out in the issue dated 05 January 1980 after saving a balloon at Cheeky's new year party.  On his debut, the goalkeeping moggie hadn't previously appeared in Cheeky's strip in Krazy, but he subsequently featured in Krazy dated 24 December 1977, although he realised he was in the wrong comic.

Goalie Cat was usually to be found in Cheeky's front garden, most frequently in the first panel of the Tuesday page, where the toothy funster would casually try to boot a tin can past the moggy.  Leaping with, er, catlike grace, Goalie Cat would inevitably pull off a save that (insert name of preferred goalkeeper here) would be proud of.  Even sneaky backheels wouldn't get past the feline footballer.  In 04 February 1978's skateboard issue, Cheeky's skateboard-propelled shot was deftly plucked from the air by the safest paws in Krazy Town. 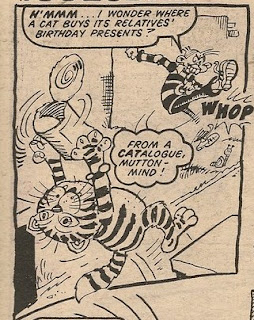 Not only did the Goalie Cat sequence give Cheeky the opportunity to display his questionable footie skills, he regularly delivered the feed line for a cat-type joke while doing so.  The cat would 'think' the reply (a talking cat would be ridiculous, obviously), but Cheeky could evidently read moggy-thoughts, as in the 08 December 1979 issue the roles were reversed; Goalie Cat 'thought' the riddle and Cheeky provided the answer.  As well as the tag-line to the gag, Goalie Cat's thought-balloon reply would also contain a less than complimentary remark directed at Cheeky.

A pig substituted for an injured Goalie Cat in the 13 May 1978 issue (I presume the writer couldn't think of a cat joke that week). 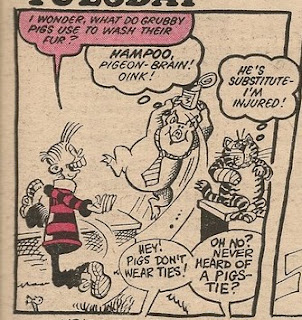 The soccer-mad moggy got his first extended moment in the spotlight in the comic dated 03 June 1978, as he assisted in demonstrating Six-Gun Sam's gunslinging skills (or lack thereof) across the whole week.  Sam told Cheeky "The Goalie Cat is gonna throw a can in the air for me every day until I hit it!" (presumably he meant the can, not the cat).  By Saturday, Sam was so frustrated at being unable to hit the target that he tossed his gun over his shoulder, fetching Goalie Cat a nasty blow on his furry noggin.

Just over a month later, the 22 July 1978 issue saw Goalie Cat featured throughout the week again, as Cheeky vowed to get a can past the moggy if it took him all week.  After a week (except Thursday) of cat jokes and failed shots, Goalie Cat and the local moggies ganged up on the toothy funster, booting a selection of tin cans and discarded footwear in Cheeky's direction.

In 19 August 1978's 60-years-into-the-future issue, we saw an elderly Cheeky kicking a tin at an aged Goalie Cat, who made his usual save, but with the aid of a walking stick.

It seems that by the 25 November 1978 issue, the Cheeky Weekly Inconsistent Hair Colour Syndrome had leapt the species boundary from human to feline, as Goalie Cat was missing his stripes. 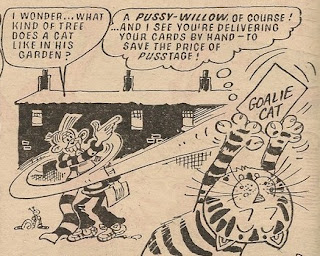 Goalie Cat saved The Mystery Comic in the 03 March 1979 issue, and in the comic dated 22 December 1979 the football mad moggy caught the Christmas card that Cheeky lobbed at him.

The longest gap between appearances of the Goalie Cat was the 15 weeks that elapsed between the 25 August 1979 and 08 December 1979 issues.  This gap was acknowledged with a note under the panel when he returned, reading "Coo! Where's he been all this time!!?"

The furry feline footballer made a brief appearance in the Skateboard Squad strip dated 13 May 1978.