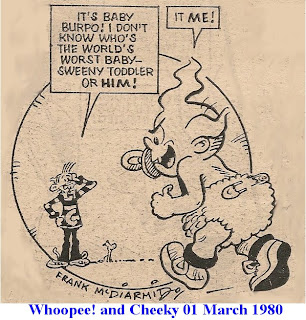 The vote is closed over at Bruce's blog and Burpo's not happy about the result.  However, it's not surprising that Sweeny Toddler won, as he had his own strip for far longer than Burpo and is much better known among fans of British comics as a result.

Thanks to those of you who voted Burpo (me and two others!), and thanks to Bruce for hosting the poll.
Posted by Niblet at 11:45