Fan of TV Westerns, 6-Gun Sam joined the roster of Cheeky's Krazy Town pals in the 14th edition of Cheeky Weekly, dated 21 January 1978, and went on to feature in a total of 98 issues. Sam's appearances always heralded a cowboy joke, with Cheeky usually playing the 'I don't know, why DID the cowboy cross the road?' straight man role. Sam's punchline was often delivered with a spirited 'Yee-Hah', sometimes a 'Whoop-de-Doo', or occasionally the curious 'Rooti-Tooti', which I presume is derived from 'rootin'-tootin'', but I don't think I've ever heard John Wayne saying it. 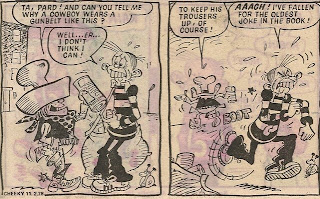 Sam's turn to be the 'Cheeky's pal featured throughout the week' came in the 03 June 1978 issue, when with the help of The Goalie Cat, who propelled tin can targets into the air, Sam attempted to demonstrate his sharp-shooting pop gun skills. 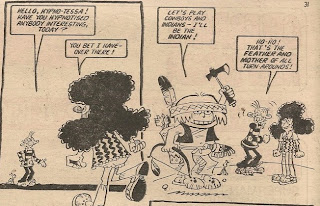 In the 02 June 1979 issue, Hypno Tessa uses her powers of suggestion to persuade Sam to dress as a Native American. In the comic dated 19 January 1980, Sam displays a cruel streak when he draws a bead on poor, defenceless Snail. 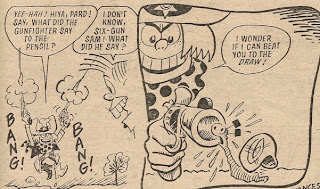 Sam appeared on the front cover of 6 issues of Cheeky Weekly, 4 times in Cheeky's Week strips, and in the main illustrations on the cover of the 15 April 1978 and 05 January 1980 issues. He demonstrated his lariat skills on the Pin-Up Pal poster in the 13 May 1978 issue, and a booklet of Six-Gun Sam jokes was printed in the comic dated 08 December 1979.  Sam made a guest appearance in the Skateboard Squad strip in the 24 June 1978 issue. 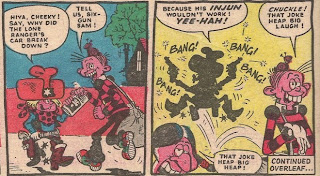 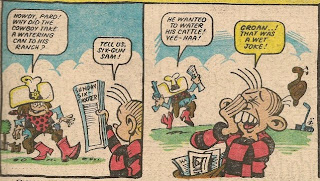 The comical cowpoke was another victim of CWIHCS (Cheeky Weekly Inconsistent Hair Colour Syndrome), being depicted with brown and blonde hair. Sam appeared in just one episode of Cheeky's strip in Krazy, dated 15 April 1978.