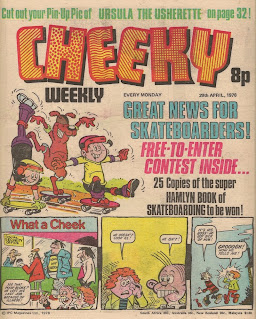 The cover of the 28th issue of Cheeky Weekly gives prominence to this week's competition to win copies of The Hamlyn Book Of Skateboarding, and the comic's own boarders, Skateboard Squad, are on hand to celebrate. Meanwhile Cheeky and anonymous pal are for some reason in the dole office, where the toothy funster delivers the What a Cheek gag.

A colour ad on page 8 with the strapline 'Holy Treborland, Batman, what a Chewtastic offer' alerts readers to the fact that Trebor Chews wrappers can be exchanged for Batman-related models from the Corgi Junior range.  Simply send 20 wrappers together with 10p postage to get a Batmobile, Batboat or Batcopter.  They'll try to send your choice of model but can't guarantee to do so. 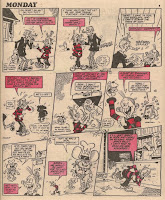 On Monday, Snail has a disturbing experience when he finds he has slipped through the page structure and can see himself in the adjacent comic panels.  Cheeky, oblivious to his mollusc pal's 'breaking-the comic-panel' trauma, enters the newsagent to commence reading the new James Bold novel, concerning the mysterious events unfolding in The Frightened Village.

It's funny how Cheeky is unaffected by the spooky goings-on in which James Bold is involved, yet is so terrified when he finishes reading the Creepy Sleepy Tale that he refuses to go home, and intends to spend the night hiding under Burpo's cot.

Sid the Street-Sweeper appears on four days in this issue, handing Cheeky pages from the Mystery Comic that have been littering the streets of Krazy Town.  It's not until Friday that Sid hands Cheeky the Mustapha Million pages, which is the only Mystery Comic feature in which the toothy funster is interested.

On the Friday page we also see the Cheeky Weekly editor, anxiously pacing atop King's Reach Tower (despite having his wages returned earlier in the issue, he's still concerned about the missing Mustapha page).  King's Reach Tower was at that time the home of publisher IPC. 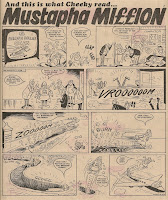 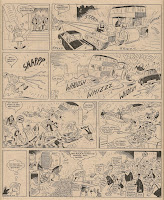 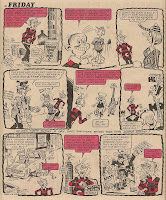 In Mustapha's strip we see him watching an episode of 6 Million Dollar Gran on TV (so we briefly get to see what Reg Parlett's version of Gran looks like), before Mustapha attempts to become bionic himself.

On page 25 there's an ad for Funny Faces - no, not the lollies, but a blank cartoon face with a selection of stick-on features, manufactured by Pritt's of Pritt-Stick fame.

The Pin-Up Pal poster of Ursula brings issue 28 to a close.