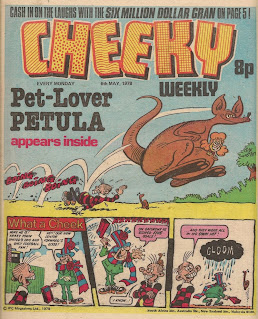 Cheeky is marsupially mashed by Petula's pouch-packing pet in another nice main cover illustration by Frank McDiarmid.  The What a Cheek strip features a Krazy Town United gag which ends with what looks like Gloomy Glad's cloud hovering over the team's one supporter.

Skateboard Squad are invited to give a display at the school sports day, and in the grand British tradition of sports-day-set comic stories, a thief is on hand to steal the trophies.  However, he is soon apprehended as the Squad use various items of sports equipment to halt his getaway. 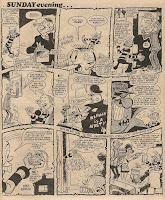 On Sunday evening as he returns home to enact his latest ruse for watching 6 Million Dollar Gran, Cheeky meets Herman the traffic warden, who is practising for his attempt on the world parking-ticket record.  Then Cheeky watches 6 Million Dollar Gran get involved in trouble at the bank, with a nice depiction by Ian Knox of the synthetic senior citizen's electronic memory circuits. 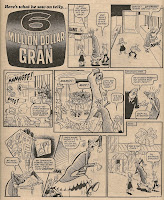 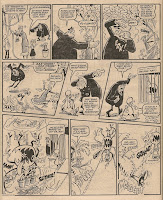 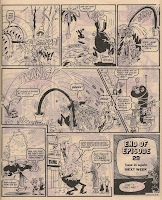 Thursday's Home Movie is a spoof of long-running British TV cop show, Z Cars, which started in 1962 and, at the time this issue of Cheeky Weekly was published, was nearing its end.  However, the first panel of the strip is a nod to even longer-running British police TV show, Dixon of Dock Green, which ran from 1955 to 1976. 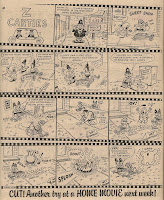 There is no Pin-Up Pal poster this week, as the back cover features the second of 3 appearances of the ad for Trebor's Corgi Juniors Batman promotion.